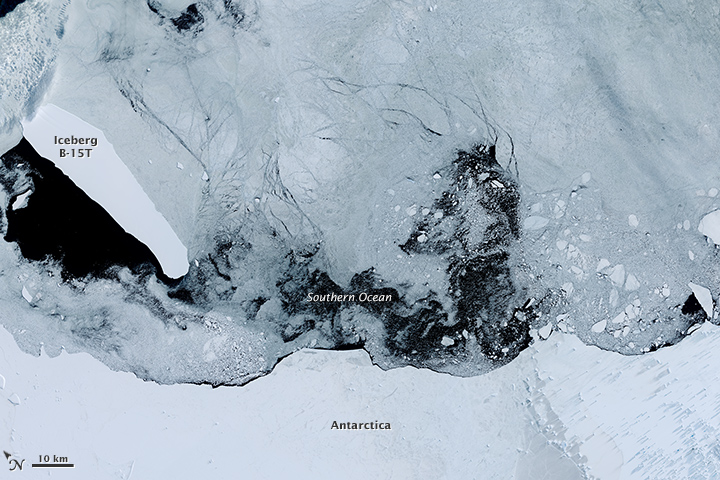 March 2015 marked the 15th year that iceberg B-15 remained afloat around Antarctica...at least what’s left of it. The berg first made its break from the Ross Ice Shelf in late March 2000. One of the largest icebergs ever observed, it measured about 270 kilometers (170 miles) long and 40 kilometers (25 miles) wide—almost as large as the state of Connecticut.

Fifteen years later, the U.S. National Ice Center (NIC) reported that eight fragments of the original berg remain. (Icebergs and fragments must measure at least 19 kilometers (12 miles) long in order to be named and tracked by the center.) According to NIC’s weekly report from April 3, 2015, the largest surviving fragment was B-15T, which measured 52 kilometers (32 miles) long and 13 kilometers (8 miles) wide.

The Operational Land Imager (OLI) on Landsat 8 acquired this natural-color image of B-15T on January 14, 2015. The iceberg was located amid sea ice off the Princess Astrid Coast, just east of its position pictured in an image acquired April 5, 2015, by the Moderate Resolution Imaging Spectroradiometer (MODIS) on NASA’s Terra satellite.

Many icebergs get caught up in the currents circling Antarctica and then eventually spin off to the north and break up. However, bergs that stay trapped in cool coastal waters can persist for decades.