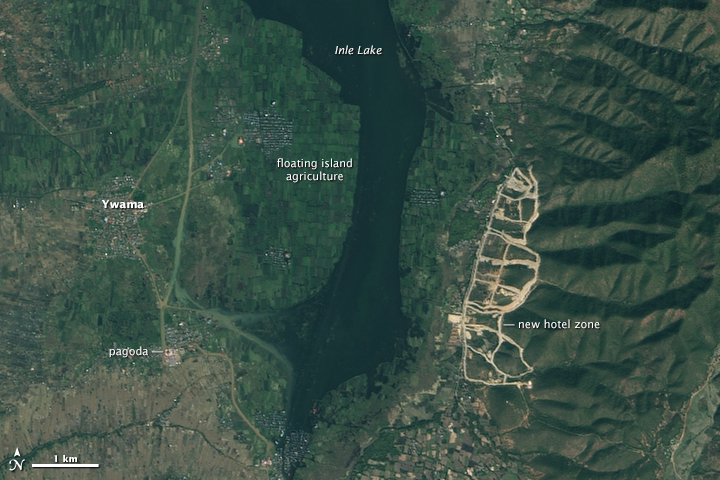 It is fairly straightforward to measure the area of most lakes. Certain satellite sensors, such as the Operational Land Imager (OLI) on Landsat 8, are particularly well suited to the chore because they collect information from several sections, or bands, of the electromagnetic spectrum that can be used to distinguish between water, land, and aquatic vegetation.

However, determining the size of Inle Lake poses a special challenge. The second largest lake in Myanmar (Burma) has a unique agricultural system that makes the boundary between land and water remarkably fuzzy. The system, known locally as ye-chan, involves the cultivation of hundreds of hectares of floating “islands” that produce enough tomatoes and other vegetables to drive the region’s economy.

Landsat 8 acquired an image (top) of the southern part of Inle Lake on January 25, 2015. Ye-chan, is made possible by water hyacinth (Eichhornia crassipes), a fast-growing aquatic perennial that thrives in the warm, shallow water. Considered a pest, water hyacinth is known for blanketing shallow lakes so tightly that it can grind boat traffic to a standstill. In some parts of Inle Lake, the floating roots are so dense that they form mats sturdy enough to trap and hold sediment.

After 20 to 30 years, those floating mats of leaves, sediment, and debris (about one meter thick) are capable of bearing a significant amount of weight. Farmers saw them into strips, tow them to one of several stilt villages on the lake, load them with layers of mud and silt, sow them with seeds or seedlings, and stake them down with bamboo poles to prevent them from drifting away. Tomatoes are by far the most popular crop, accounting for about 90 percent of ye-chan, production. Other common crops include beans, cucumbers, gourds, and flowers. 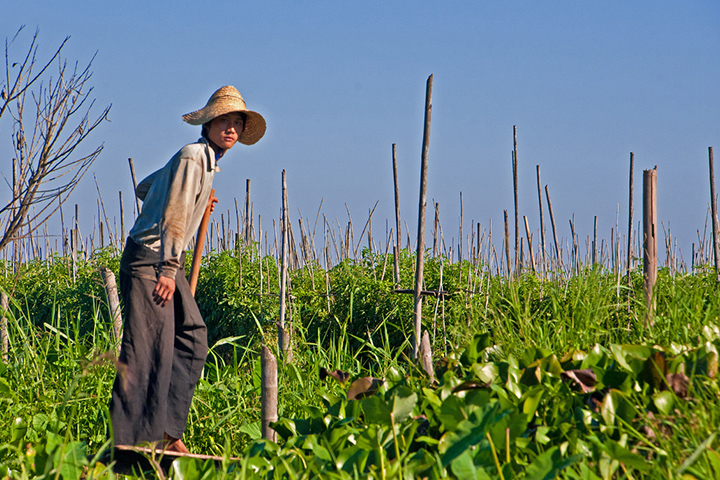 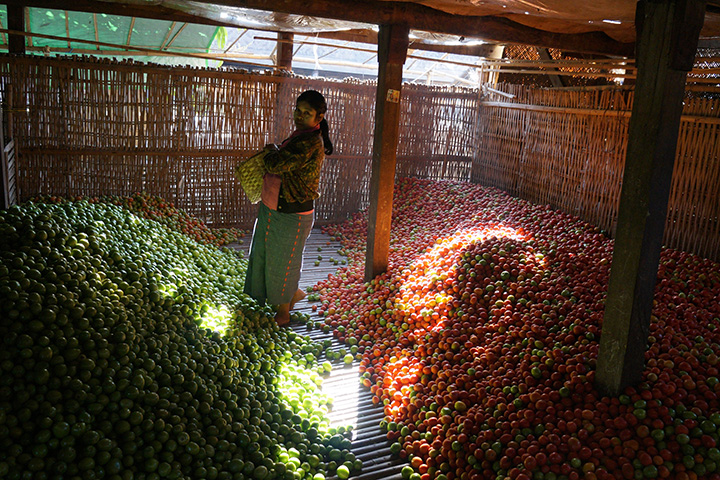 “Though ye-chan, agriculture probably dates back to the end of the 19th century, it was little-known and little-practiced until the 1960s when new infrastructure made it easier to get crops from Southern Shan State [the location of Inle Lake] to other parts of the country,” explained Martin Michalon, a geographer at the Ecole des Hautes Etues en Sciences Sociales, who wrote his master’s thesis about Inle Lake. Since then the ye-chan, farming has boomed a second time in the 1990s, as Myanmar (Burma) has shifted away from socialism toward a more market-based economy.

According to one study, the area covered by floating gardens increased by 500 percent between 1992 and 2009. The publication of research noting the decreasing amount of open water on Lake Inle led to misleading news stories that suggested the lake was in the process of drying up, Martin noted. “Actually, the total lake area is relatively stable; it’s the open water that has shrunk over time due to the rapid expansion of the floating gardens.”

That is not to say the lake isn’t facing ecological strain. Many non-governmental organizations and environmental groups are worried about the intensive use of chemical fertilizers and pesticides, overfishing, increased sediment runoff into the lake, and deforestation in the surrounding hills.

Meanwhile, a bustling tourism industry has sprung up around the lake in recent years—drawn by the remarkable pagodas in the area and the unique foot-rowing habit of the Intha people who live on the lake. According to the Myanmar government, the number of foreign tourists has swollen from 26,000 per year in 1992 to 842,000 in 2013. In the Landsat image above, evidence of the boom is stark. Some 250 hectares of land on the southeastern shore have been cleared in anticipation of new hotels.

The uppermost photo, taken by George Seielstad and first published on the Earth Science Picture of the Day, shows a view of rows of tomatoes in the lake with water hyacinth in the foreground. The floating islands are held down with bamboo stakes. The second and third photographs, taken by Martin Michalon, show a warehouse full of picked tomatoes in Nyaungshew and a farmer applying fertilizer to a row of tomatoes. 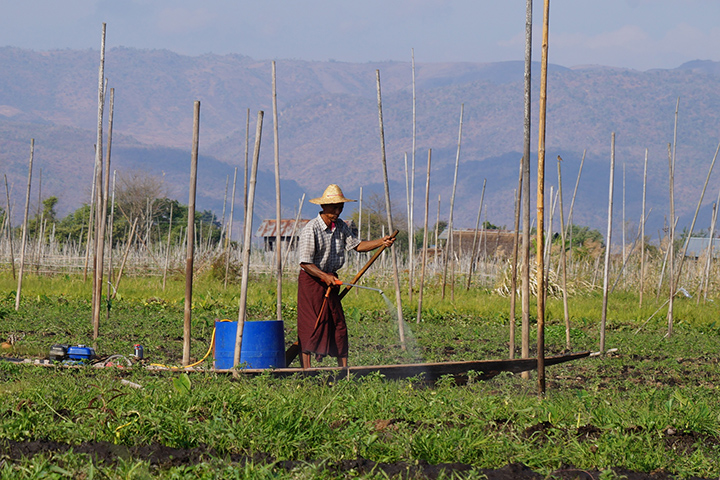