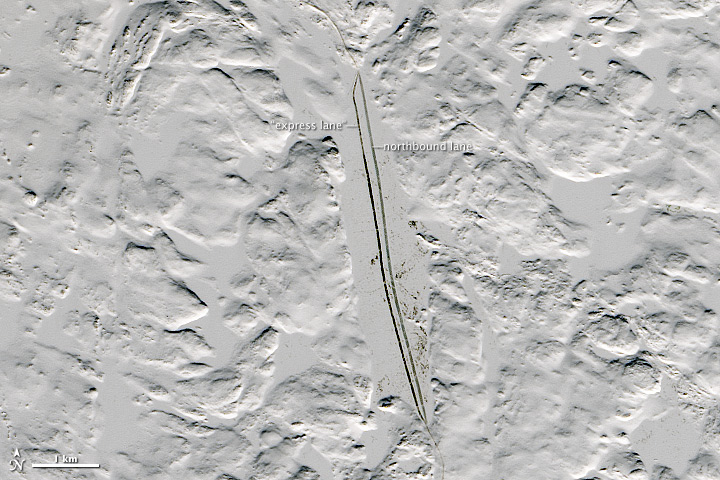 In the farthest reaches of northwestern Canada, there are few people and fewer roads. The largest settlements tend to be gold or diamond mining towns. And while just about every one of them has an airstrip capable of handling large planes, the cost of air freight is substantial. So when winter comes, fuel, explosives, and heavy equipment move north in an unusual way: via trucks driving on frozen lakes.

The lakes in the Northwest Territories and Nunavut begin to freeze in early November. Once the ice is thick enough to support construction vehicles, crews plow snow off the surface and expose the ice directly to the intense cold, making it even thicker. By early February in most years, they have created a roadbed as wide as an eight-lane freeway, with ice capable of supporting double trailers hauling up to 42 tons. Though there are some land crossings between lakes, 87 percent of the 600 kilometer (400 mile) road is on ice.

The ice sags under a load, and the faster the vehicle, the deeper the depression. This sends out waves under the ice, which bounce back from the shoreline and the shallows. In weak spots, these waves can shatter the ice. To reduce this danger, officials set speed limits for the road based on ice conditions, weather, and weight. A 25 kilometer per hour (15 miles per hour) speed limit is typical for fully loaded trucks, while 60 kmph (35 mph) is permitted for empty trucks going southbound in “express lanes.” Engineers regularly monitor the ice to keep it safe and passable. 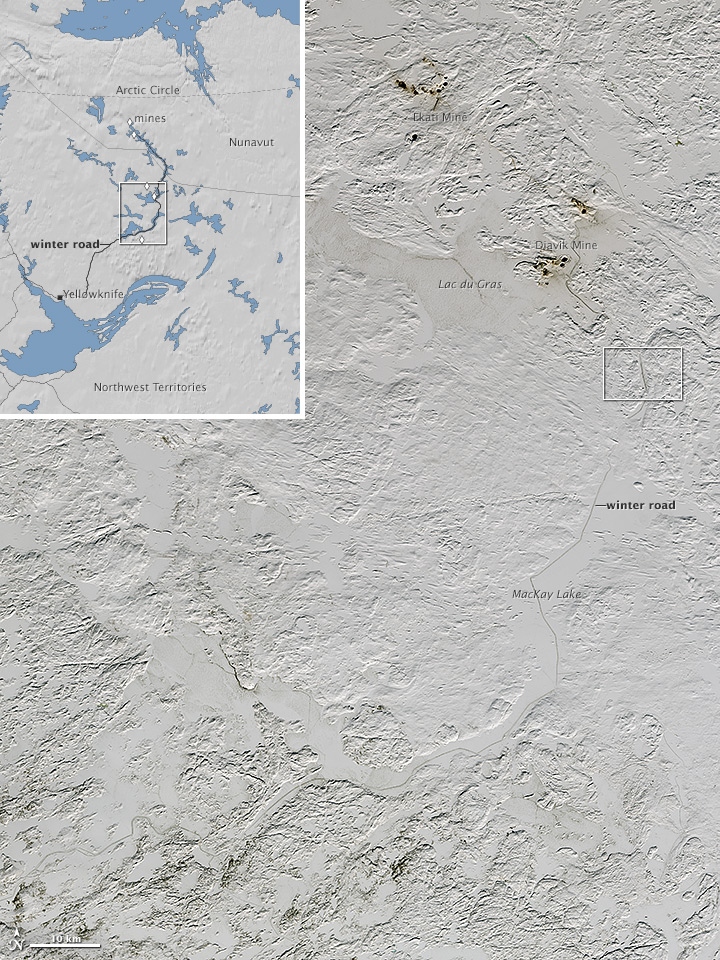 The images above were acquired by the Landsat 8 satellite on February 24, 2015. The top image shows in detail where the winter road divides into two lanes over one of the lakes. The wider view includes almost all of the ice trucking route in northwest Canada. The winter road terminated near the Diavik Diamond mine in 2015; in some years, it has been extended farther north to reach the Lupin and Jericho mines in Nunavut, but both have recently been shuttered.

The road carries thousands of loads each winter, bringing in items either too large or too expensive to carry on aircraft. Hauling freight over this ephemeral road system is six to eight times less expensive than flights, and some equipment, such as giant ore-carrying dump trucks, would never fit inside a plane.

The winter road closes to heavy traffic when spring arrives and the ice thins. It is completely impassable by mid-April. The tonnage hauled and length of the driving season is quite variable from year to year. In 2006, for instance, warm weather and thin ice conditions kept the heaviest loads off the road all season, yet the very next year saw a record number of loads and a much longer than average hauling season.