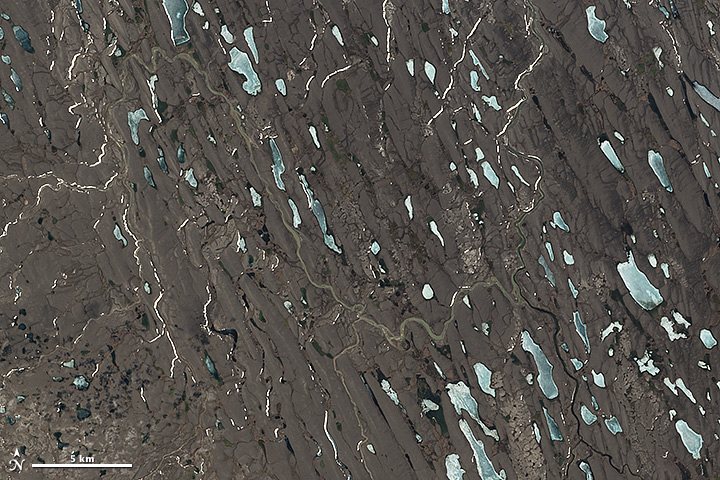 When glaciers retreat, they sometimes leave behind an enigmatic landform known as a drumlin field, an area of elongated hills aligned parallel to the flow of ice. While the word “drumlin” comes from the Gaelic and Irish term “druim”—“back” or “ridge”—the ridges pictured above are far from Ireland (though the landform does exist there).

On June 21, 2014, the Operational Land Imager (OLI) on Landsat 8 acquired this image of a drumlin field in the Nunavut Territory of Canada, about 27 kilometers (17 miles) southwest from Amundsen Gulf.

The drumlins and surrounding area seen here are thought to have been formed below the Laurentide Ice Sheet during the last Ice Age. The size and shape of the drumlins varies from small and egg-shaped to more elongated and asymmetrical. Such variability is common within drumlin fields around the world.

The field pictured above, however, appears to have more elongated forms than most. Researchers think it’s possible that the ice cover included a fast-flowing ice stream—an area of faster moving ice within the larger glacier. Most scientists agree that faster ice produces longer drumlins. Still, the nature of their complex shapes has challenged researchers to find a theory that explains all aspects of their formation.

In fact, drumlin researcher Rebecca Lee says that no one knows exactly how drumlins form. Competing theories include formation by water or ice flow, or some combination of the two. A more complete understanding of how drumlins form could help researchers determine past ice conditions, such as how fast the ice was moving. It could also help them to interpret glacial deposits and where they came from.

One approach is to use remote sensing to perform a large-scale analysis, comparing of the size and shape of thousands of drumlins. The effort, Lee said, “may provide new information and help end the drumlin debate.”