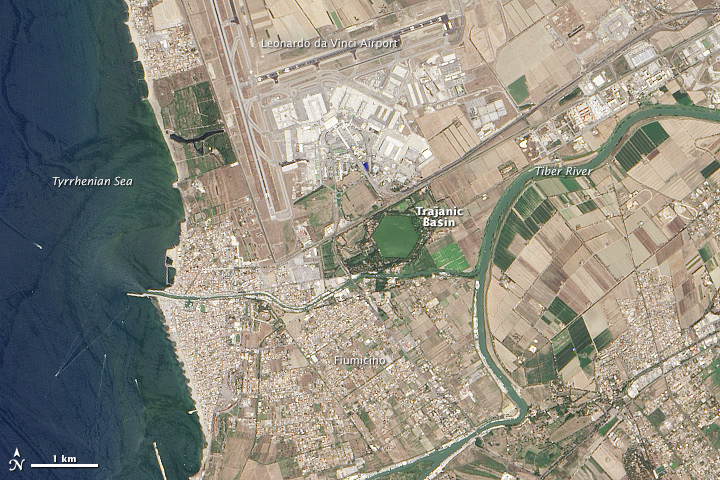 What was once a mighty port for ships carrying food, building supplies, and other commodities into and out of Rome is now a mighty port for airplanes shuttling people to and from that city. The ancient, artificial harbor of Portus has blended into the flat, coastal landscape of Fiumicino, Italy.

Situated about 30 kilometers (20 miles) southwest of Rome, Portus was built in the first and second century of the modern era, and it became the Roman Empire’s leading maritime hub for nearly 500 years. Some historians and archaeologists consider it one of the Romans’ greatest engineering achievements.

At a time when the Tyrrhenian Sea coast was at least a kilometer or two east of the modern shoreline, Roman engineers, laborers, and slaves first carved the Claudian Basin out of the coastline. The artificial harbor was commissioned around 46 A.D. by Emperor Claudius and was to be sited on the north bank of the Tiber River about 4 kilometers (2.5 miles) north of the port of Ostia. Taking nearly 20 years to complete, the new port was nearly a mile wide, spanned 70 hectares (170 acres), and included two sea walls and a lighthouse.

Portus was created as a supplement to Ostia, which could no longer handle the volume of commerce needed to supply the growing city of Rome. Around 103 A.D., Emperor Trajan expanded Portus, carving out another 39 hectares (97 acres) in a distinctive hexagonal shape. The inner Trajanic Basin connected to the outer Claudian Basin and the sea; it was also connected to the Tiber via canal. The port was eventually surrounded by great columned warehouses and a palace, among many other amenities. Once expanded, Portus hosted as many as 350 ships at a time, archaeologists believe.

On July 27, 2013, the Operational Land Imager (OLI) on Landsat 8 acquired this view of the ancient Roman port. The hexagonal Trajanic Basin now sits about two kilometers inland, and it is a reed-filled lake. Over the past 1,500 years, the coastline has migrated westward as the outer Claudian Basin filled in naturally with silt and sediment. The Advanced Spaceborne Thermal Emission and Reflection Radiometer (ASTER) on NASA's Terra satellite captured a false-color view of the area in June 2014 that you can view here.

The ancient port has been the subject of intense study since 2007. Researchers from the University of Southampton, the British School at Rome, the Soprintendenza Speciale per i Beni Archeologici di Roma, and the University of Cambridge have brought everything from geophysical mapping tools and computer modeling together with old-fashioned archaeological digging to learn more about the ancient port. Recently, the effort yielded evidence of a great canal connecting Portus to the other famous Roman port at Ostia.

Just north of the Trajanic Basin, Leonardo da Vinci International Airport now covers some of the area of the old port. The airport is Italy’s largest and the sixth largest in Europe, handling about 38 million passengers per year. To the south is the town of Fiumicino, a name that means “little river.”