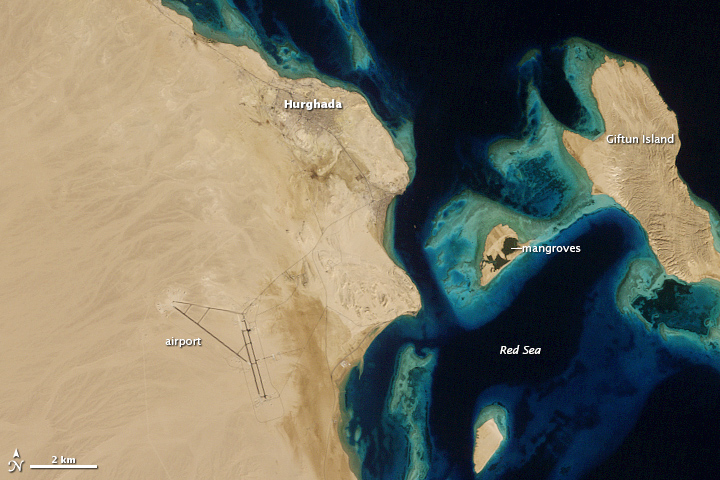 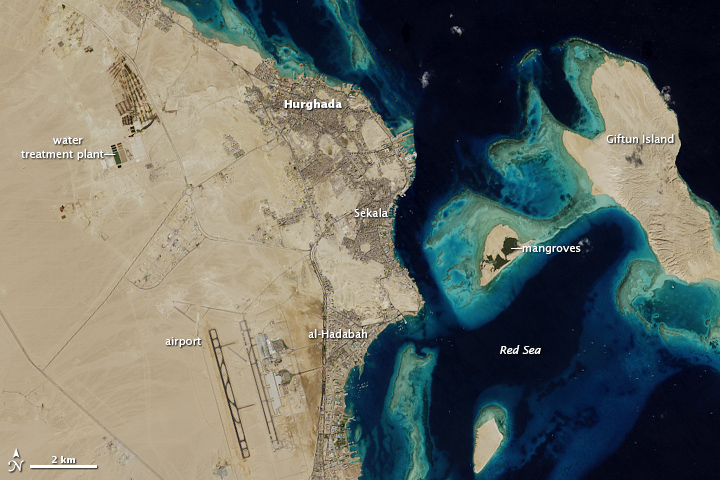 Hurghada first emerged as a settlement of significance in 1909, when British geologists discovered oil reserves nearby. For decades oil—as well as fishing—drove the small Egyptian town’s economy. Today, it is a major resort city, part of a transformation along the Red Sea coast.

As recently as the 1980s, only 12,000 people lived in Hurghada. It was around that time that hotels started to spring up, as the region’s spectacular coastal views, perpetually sunny skies, mild winters, and extensive network of coral reefs proved an appealing combination for developers. By 2014, Hurghada’s population had swollen to more than 250,000 people, and the city had become a haven for tourists—fueled by some of the best diving and snorkeling opportunities in the world. More than one million tourists, mainly Europeans and Russians, visit Hurghada each year.

As Hurghada has grown, satellites have observed dramatic changes to the landscape. The two natural-color images above were captured by the Thematic Mapper (TM) on Landsat 5 in 1985 and the Operational Land Imager (OLI) on Landsat 8 in 2014.

Aside from the airport and the modest cluster of buildings that made up Hurghada, the region was undeveloped in 1984. The town appears gray in comparison to the tan desert. Offshore, shallower water appears turquoise; deeper water is dark blue. By 2014, hotels and other residential and commercial developments crowd the landscape. In addition to expansion around the core of Hurghada, buildings and infrastructure now hug the coasts, particularly in the neighborhood of Sekala, the center of the city’s nightlife.

Development has been particularly dense just east of Hurghada International Airport in a neighborhood called Al-Hadabah. The airport, now Egypt’s second busiest, has undergone several expansions and serves several million people each year. In another sign of urban expansion, a large water treatment planet was built to the northwest.

While the tourist traffic boosts the Egyptian economy, the resorts have come with a cost for the local environment, particularly the coral reef ecosystems that make the area so appealing. Construction of hotels and other infrastructure often involved the destruction of fringing reefs along the coastlines, caused by the dredging or dumping of large amounts of sediment. Offshore coral reefs have suffered damage from careless snorkelers and scuba divers. Meanwhile, wastewater runoff from the land has fueled the growth of harmful algae.

While it is not possible to distinguish between reefs, underwater sand, sea grass, and algae in natural-color Landsat imagery, some scientists have used other wavelengths to track changes in Hurghada’s corals. The findings indicate the reefs may be in serious trouble. According to one study, corals near Hurghada have declined by as much as 50 percent over three decades.

“What is happening to the coral reef around Hurghada is extremely sad,” said Hesham El-Askary, the study’s author and an associate professor at Chapman University. “In addition to the effects of climate change, Hurghada’s coral reefs are damaged, displaced, polluted, and stepped on.”