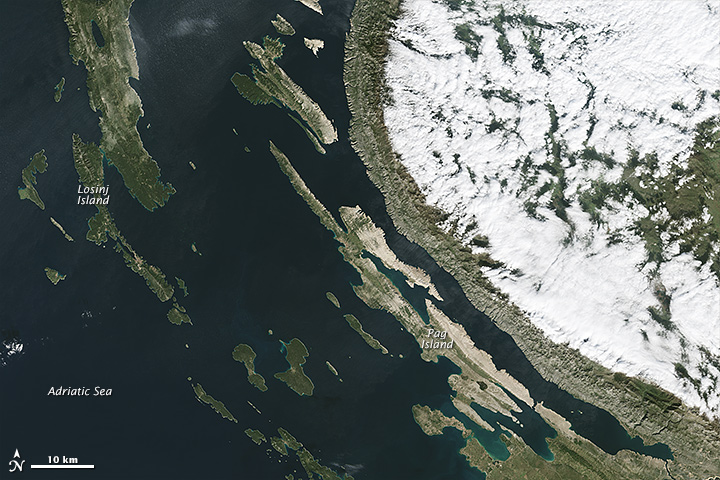 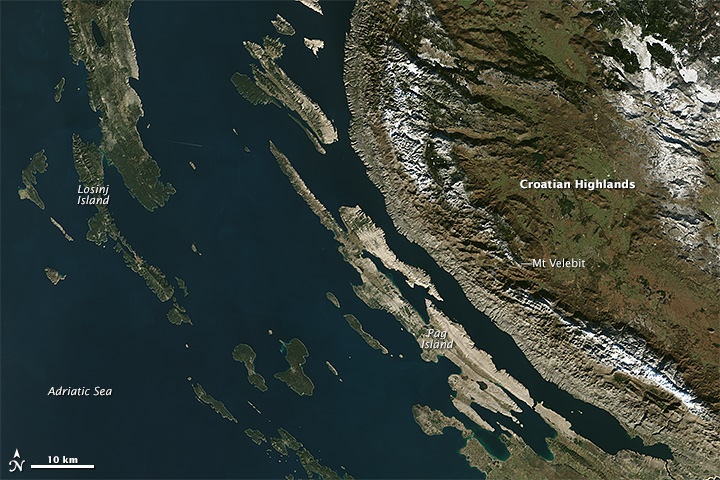 Of Mountains and Moisture

The Dinarnic Alps follow Croatia’s long Adriatic coast like a curving spine. Reaching heights up to 1,831 meters tall (6,007 feet), the mountains and their bare leeward cliffs provide a dramatic backdrop to coastal Croatian vacation spots. They also divide two of the country’s climatic zones. West of the mountains, the mild winters and dry summers of a Mediterranean climate reign on the coast. On the windward east side, the country’s coldest and wettest places are found in the Croatian Highlands.

In this pair of images from the Operational Land Imager (OLI) on Landsat 8, you can see the role that the Dinaric Alps play in managing moisture. The images show the northwestern Dalmatian coast and the Velebit Mountain Range. In the image from December 11, 2013, the green hinterlands of the Lika region are visible just east of the mountains. On the October 27, 2014, dense clouds are trapped by the Velebit Mountains and cover the region. The Lika region receives as much as 1,600 millimeters (63 inches) of rain per year, supporting dense forests of beech and fir trees. On the drier, “olive-climate” west side of the mountains, Mediterranean shrublands are most common.

The Dinaric Alps also affect the local climate by shaping wind patterns. As with many people along Mediterranean shores, coastal Croatians have names for every wind. The most famous and furious of these is the bora (or bura in Croatian). The bora is a gusty, violent, northeasterly wind that whips down the Dinaric Alps and blows into the Adriatic. At its worst, the bora can reach hurricane-force speeds of 70 meters per second (156 miles per hour) and disrupt the lives of coastal residents for several days.

Meteorologists previously thought the bora was a topographically descending, temperature-driven wind. But in studies over the past 30 years, they have discovered that the most severe winds are created by mountain wave breaking—the rotational turbulence created when airstreams are interrupted by mountain tops.

As early as 1889, the Croatian meteorologist and seismologist Andrija MohoroviÄiÄ‡ first published observations on this type of turbulence (the bora rotor cloud). Clouds only sometimes appear with the bora, and the so-called “dark bora” is much less common than the cloudless or “clear bora.”

Speaking of the challenge of cloud observations, MohoroviÄiÄ‡ once remarked: “Clouds are strange fellows, and you must catch them when they appear, and not when you would like to.” Fortunately, high-resolution airborne and satellite observations, combined with computer modeling have resulted in a flurry of sophisticated bora studies in recent years.

NASA Earth Observatory image by Jesse Allen, using Landsat data from the U.S. Geological Survey. Caption by Laura Rocchio. Special thanks to the team at MapBox for tipping us off to the October 2014 image.