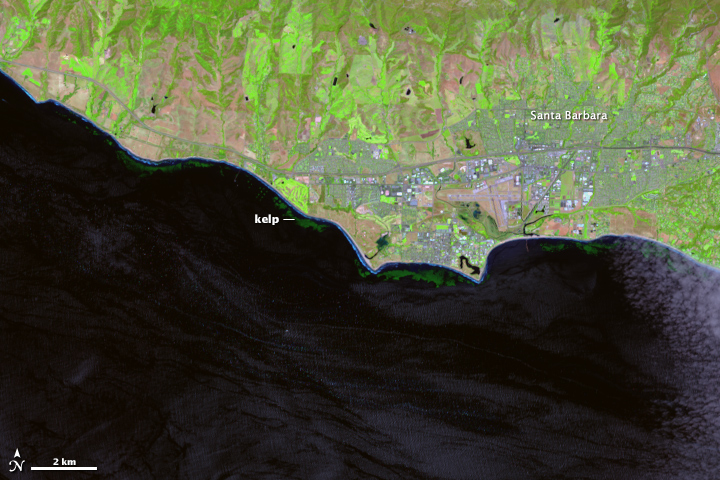 Today’s Image of the Day is an excerpt from our newest feature story: Finding Floating Forests.

After a recent scientific meeting on kelp and climate change, scientists Jarrett Byrnes, Kyle Cavanaugh, and colleagues set out to consolidate all of the available kelp forest data from around the world. They wanted to take a step toward understanding how climate change is affecting kelp globally, but they quickly discovered they had a sparse patchwork of information.

Byrnes was struck with a thought. In their research, they had used data from the Landsat series of satellites to examine individual forests across long periods of time (such as the waters off Santa Barbara, above), so why not use Landsat to expand their studies around the world? Could Landsat be used to establish global trends in kelp forest extent? The answer was yes, but the problem was eyeballs.

Unlike research on terrestrial vegetation—which uses Landsat data and powerful computer processing arrays to make worldwide calculations—distinguishing kelp forests requires manual interpretation. While kelp forests pop out to the human eye in near-infrared imagery (such as the images on this page), computers looking at the data numerically can confuse kelp patches with land vegetation. Programs and coded logic that separate aquatic vegetation from land vegetation can be confounded by things like clouds, sunglint, and sea foam. (For an example of the problem, look here.)

“I’ve spent many, many years staring at satellite imagery trying to come up with new ways to extract the kelp signal, and it is very time and work intensive,” said Cavanaugh, who is based at the University of Californiaâ€“Los Angeles. “But automated classification methods just don’t produce acceptable levels of accuracy yet.”

Byrnes, who is based at the University of Massachusettsâ€“Boston, realized that the best way to study global kelp changes was to turn to citizen scientists. Byrnes and Cavanaugh put together a science team and joined with Zooniverse, a group that connects professional scientists with citizen scientists in order to help analyze large amounts of data. The result was the Floating Forests project.

The concept is all about getting more eyeballs on Landsat imagery. Citizen scientists—recruited via the Internet—are given instruction in how to hunt for giant kelp in satellite imagery. They are then given Landsat images and asked to outline any giant kelp patches that they find. Their findings are crosschecked with those from other citizen scientists and then passed to the science team for verification. The size and location of these forests are catalogued and used to study global kelp trends.

In addition to examining the California coast, which Byrnes and Cavanaugh know well from their graduate research, the Floating Forests project has focused on the waters around Tasmania. As of January 11, 2015, more than 3,400 citizen scientists had joined Byrnes and Cavanaugh to look for kelp in 328,000 Landsat images (samples below). All combined, the citizen scientists have now made more than one million kelp classifications. The response has exceeded expectations, and the project has been expanded faster than originally planned. 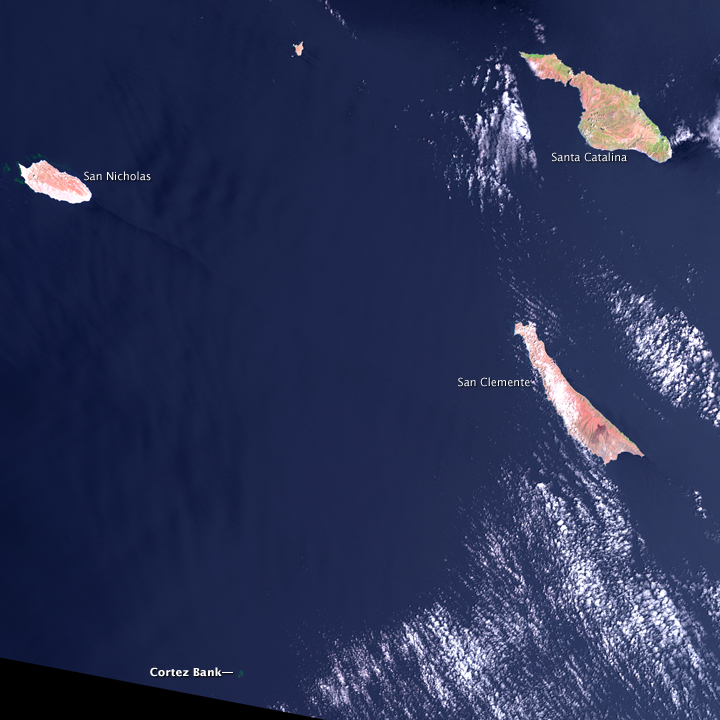 Already a discovery has been made. A citizen scientist found a patch of giant kelp on Cortez Bank, an underwater seamount about 160 kilometers (100 miles) off the coast of San Diego, not far from the Channel Islands. While giant kelp on this submerged island—which comes within feet of the surface at some points—had been documented by divers and fishermen in the past, the full extent of the kelp beds was unknown. A citizen scientist reviewed the large Landsat scene (above) and noticed the small green patch, which is shown in closeup below. 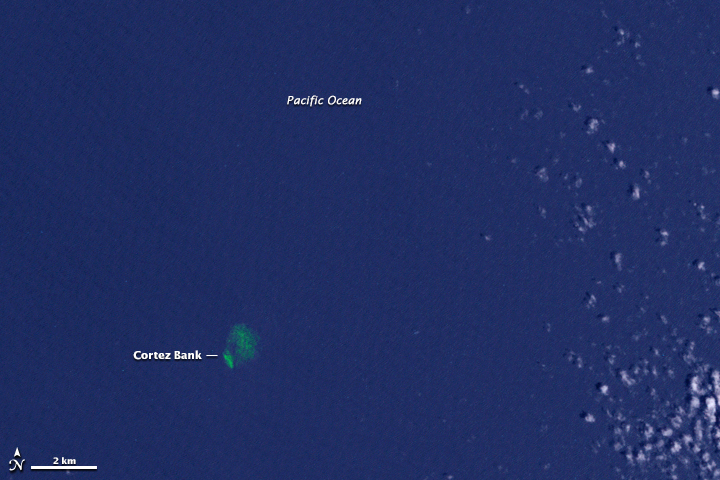 “The first few months of Floating Forests have been a huge success, and we are hopeful that we will soon be able to expand the project to other regions,” Cavanaugh said. “Our ultimate goal is to cover all the coastlines of the world that support giant kelp forests.”