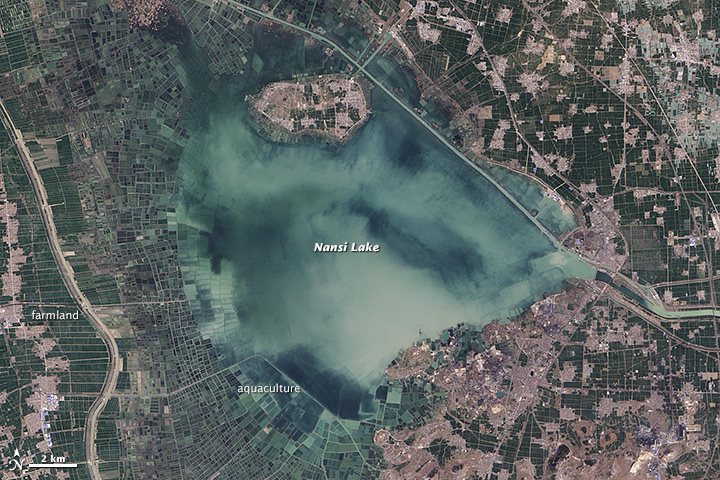 There are reportedly 117 million lakes on Earth, covering about 4 percent of the planet’s non-glaciated land surfaces. The bulk of them are in the Arctic or boreal regions of North America and Eurasia, and most are largely untouched by human activity. (Check out the pockmarked, lake-rich surfaces of the Canadian Shield or the "Barren Lands" of Nunavut to get a look at what these northerly lakes are like.)

Nansi Lake in China’s Shandong province has a very different story. With more than 96 million people living in Shandong, the fingerprints of human civilization are all over this shallow lake. As seen in this natural-color image captured by the Operational Land Imager (OLI) on Landsat 8, much of the lake is being used for either aquaculture or farming.

One study concluded that about 34 percent of the lake’s surface area had been turned into aquaculture ponds and 19 percent was used as farmland. The outer edges of the lake have been converted into land, while rectangular ponds are located closer to the center of the lake. People access the ponds by plying small boats through a network of canals.

Nansi Lake is also part of the South-North Water Transfer Project, a multi-billion dollar effort to move Yangtze River water through canals and reservoirs into the Yellow River watershed in arid northern China. Nansi Lake helps convey some of that water and serves as a storage point on the project’s eastern route, which began operating in December 2013. You can see a map of the eastern route here.