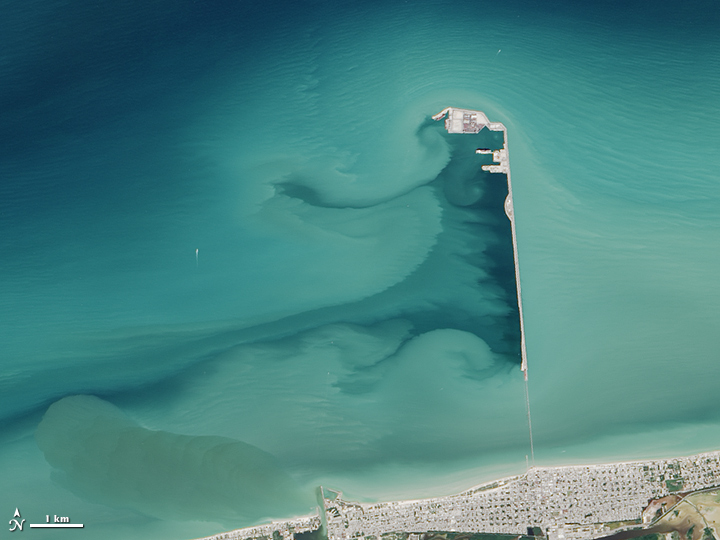 The pier that extends from Progreso into the Gulf of Mexico is among the longest such structures in the world. Located in a port city in Mexico in the state of Yucatán, the pier was built for docking large cargo and passenger ships.

The pier hasn't always reached such great lengths. Starting in 1985, builders began extending the original structure from 2 kilometers (1.2 miles) to its current length of 6.5 kilometers (4 miles). Built over a wide and shallow continental shelf, the additional length was necessary to allow docking by larger ships. In 2014, almost 100 cruise liners docked in Progreso and brought more than 344,000 passengers to the city.

The Operational Land Imager (OLI) on Landsat 8 captured this image of Progreso's pier on November 5, 2014. According to Gabriela García-Rubio of the Ensenada Center for Scientific Research and Higher Education, light turquoise areas offshore are probably shallower than the darker areas. Prevailing winds here typically blow from the east-northeast, producing short-period waves and carrying sediment westward along the shore.

The older segment of the pier (closest to the shoreline) was built atop arches that allow some sediment to pass through. The rest of the pier, however, is solid. Despite its arches, the structure as a whole has likely decreased the amount of sediment transported alongshore, leading to "updrift accretion and downdrift erosion," according to research led by García-Rubio.

"It is interesting to note that the darker regions are next to the solid part of the pier, which seems to be in agreement with a significant reduction in the alongshore transport," García-Rubio said. "The effect of the pier is more complex, however, as it seems to be producing settlement and a seaward movement of the shoreline."