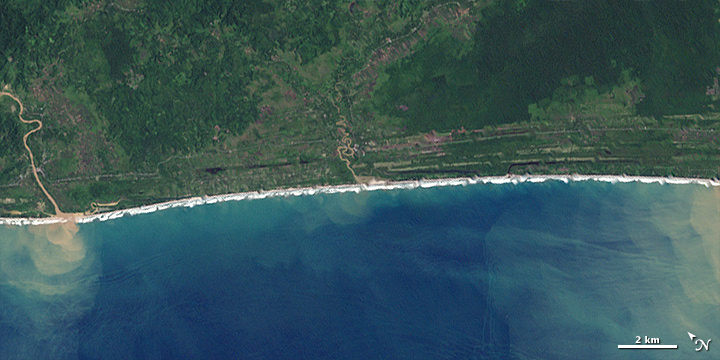 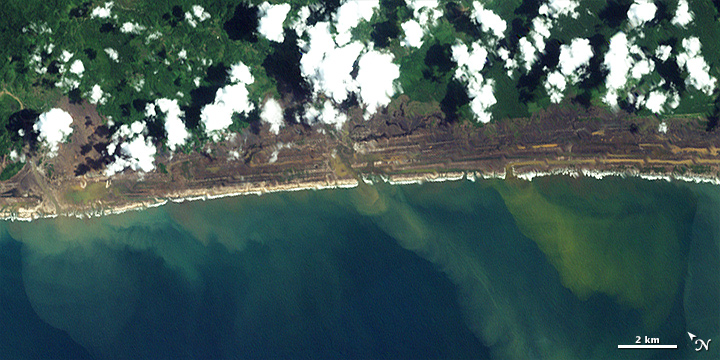 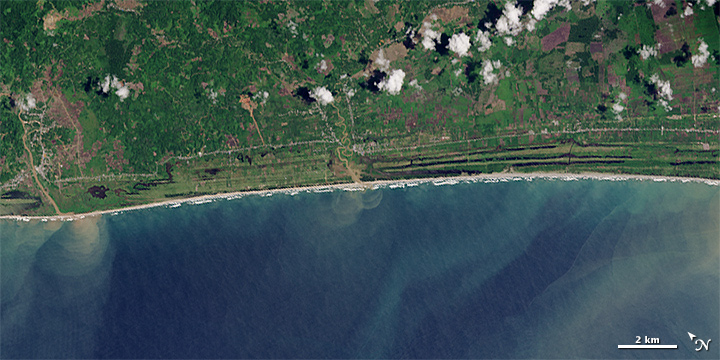 On December 26, 2004, one of the largest earthquakes in recorded history reshaped the floor of the Indian Ocean. The magnitude 9.1 Sumatra-Andaman temblor generated tsunami waves that caused widespread damage to nations around the Indian Ocean, with most of the damage affecting Indonesia. One decade later, recovery is apparent in areas such as this stretch of coastline along the island of Sumatra in western Indonesia.

The series of natural-color images above shows a small area along the Sumatran coast in Aceh province, north of Meulaboah. In this region, the wave cut a swath of near-total destruction 1.5 kilometers (roughly one mile) in most places, but penetrating farther in many others.

The first two images, acquired with Landsat 7's Enhanced Thematic Mapper Plus (ETM+) on December 13, 2004 (top) and December 29, 2004 (middle), show the area before and after the tsunami crashed ashore. The third image, acquired by the Operational Land Imager (OLI) on Landsat 8, shows the same scene almost ten years later on November 15, 2014 (bottom).

According to research published in 2010, coastline along the Aceh coast eroded back about 500 meters (1,600 feet) during the tsunami. Along straight coastline north of Meulaboah, beach ridges running parallel to the shoreline eroded and streams became connected directly to the ocean. Within weeks, however, observations showed a new coastline beginning to emerge that closely resembled the old one. Within a few years, beach ridges were recovering and vegetation was returning.