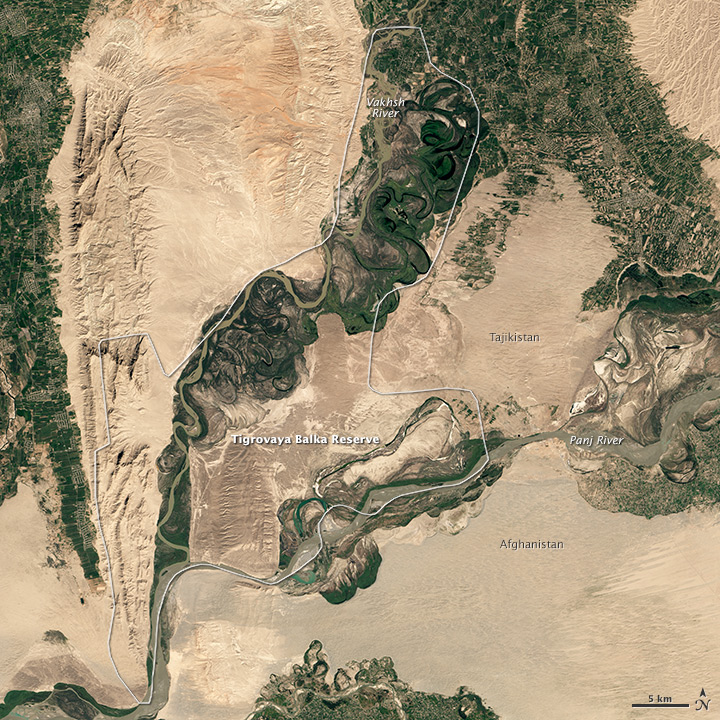 Near the border between Tajikistan and Afghanistan, two rivers merge and flow into the Amu Darya—a major river in Central Asia that ultimately feeds into the Aral Sea. On the Tajikistan side, the two rivers cradle a unique ecosystem within the Tigrovaya Balka State Nature Reserve.

On September 13, 2014, the Operational Land Imager (OLI) on Landsat 8 acquired this view of the reserve, bounded approximately by the Vakhsh River to the west and by the Panj River to the southeast. The reserve extends about 40 kilometers (25 miles) northeast of the river confluence.

Swirls and curves around the Vakhsh River indicate meanders and chute cutoffs that play a crucial role in sustaining the diversity of the floodplain ecosystem. According to Thomas Dunne, professor of hydrology and geomorphology at University of California Santa Barbara, each 'abandoned' stretch of channel is left with varying degrees of hydraulic connection to the main channel. The degree of connection evolves over time as the entrances to (and exits from) the main channel become sealed with sediment, or as the entire cutoff channel becomes filled.

Such variation in the degree of connection to the river's main channel results in water bodies that differ in chemistry and sediment concentration. For example, some are composed primarily of main-channel water, while others rely on groundwater or local runoff.

"The production of off-channel water bodies creates habitat diversity, involving water of various depths, which become shallower over time as the water body is filled with sediment and organic matter," Dunne said. "Eventually, each water body is converted to marsh or even drier floodplain, driving a succession of plants and their use by animals."