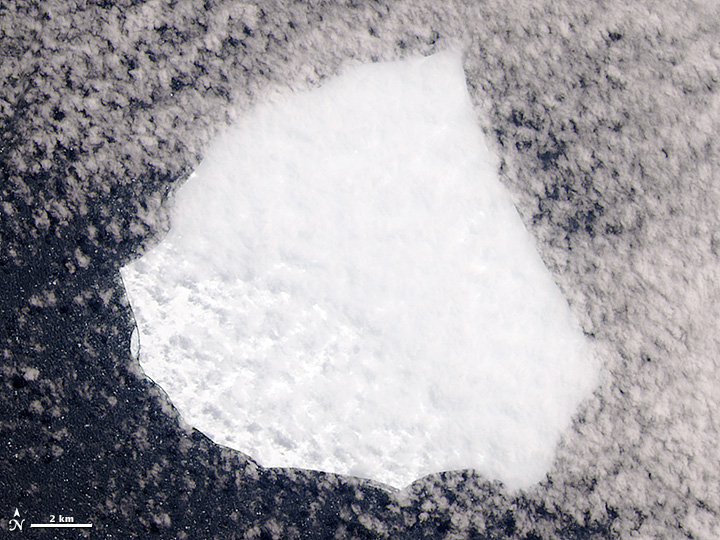 An Iceberg Without a Name 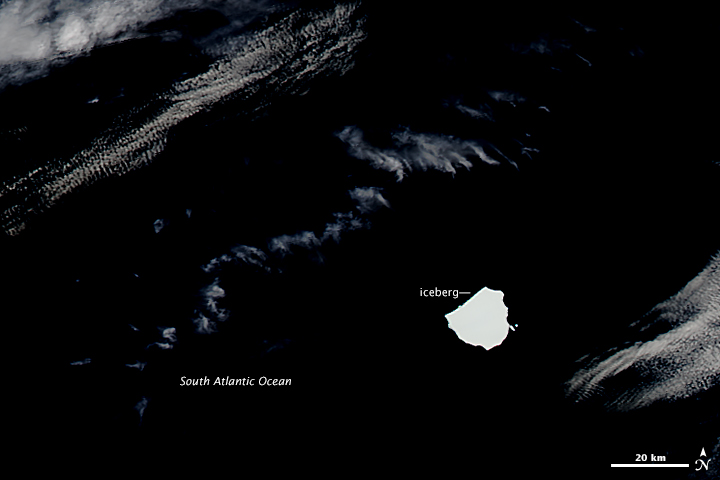 Only icebergs that have a side measuring at least 19 kilometers (12 miles) long are named and tracked by the U.S. National Ice Center. That means nearly round or square icebergs—like the one pictured above—can be quite large and still not meet the criteria for naming and tracking.

That is the case with a piece of ice detected by satellite this week. On December 3, 2014, the Operational Land Imager (OLI) on Landsat 8 acquired an image (top) of an unnamed iceberg adrift in the South Atlantic Ocean. White clouds partially obscured the white surface of the ice. Two days later, the Moderate Resolution Imaging Spectroradiometer (MODIS) on NASA’s Aqua satellite acquired a cloud-free view of the berg (bottom).

On December 3, the iceberg was located in the South Atlantic about 240 kilometers (150 miles) west of South Georgia, and measured about 165 square kilometers (64 square miles)—approximately the same area as Galveston Island, Texas. That's where the similarities end. An Antarctic iceberg with the size and shape of Galveston would be long enough to be named and tracked.

Scientists are unsure about where on Antarctica the iceberg got its start. However, its current location east of the southern tip of South America is not unusual.

"Many bergs get trapped in, and then spin off of, the currents that go around Antarctica," said Kelly Brunt, a NASA glaciologist whose research includes the study of icebergs. "They often start heading north, especially where the currents get interrupted around South Georgia."

For example, an iceberg named C-16 floated more than halfway around Antarctica before moving north. The map below shows the trajectory of C-16 from March 2000 through February 2014. The berg moved counter-clockwise around the continent and stayed in the Antarctic Coastal Current until it turned north upon reaching the Weddell Sea. "My guess is that when it approached the Weddell Sea Gyre, following the coastal current became difficult," Brunt said. 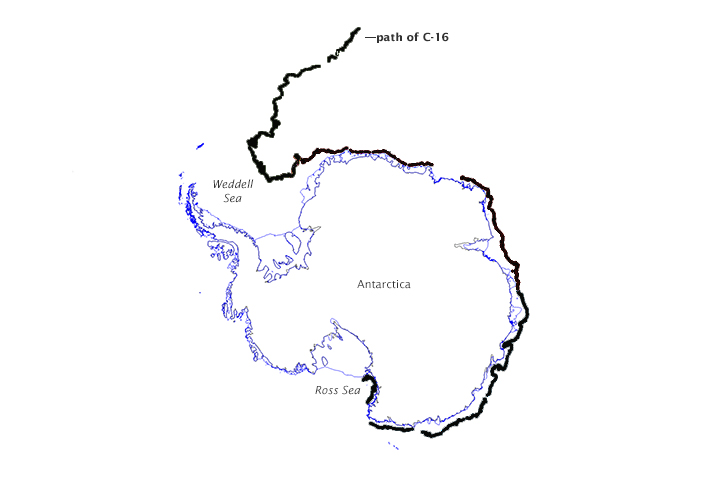