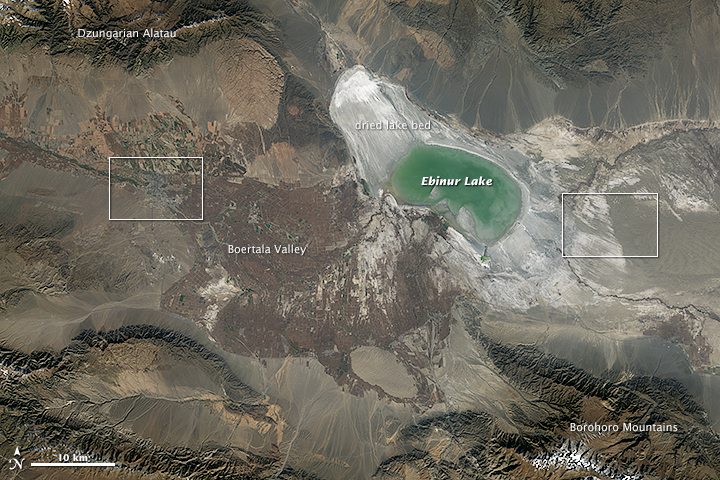 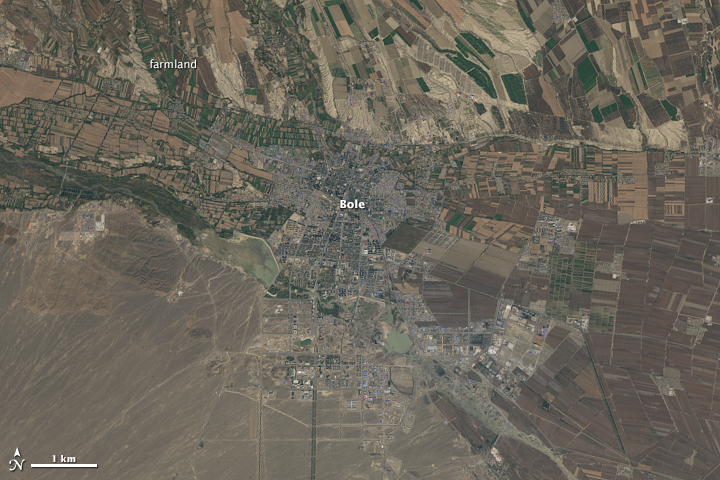 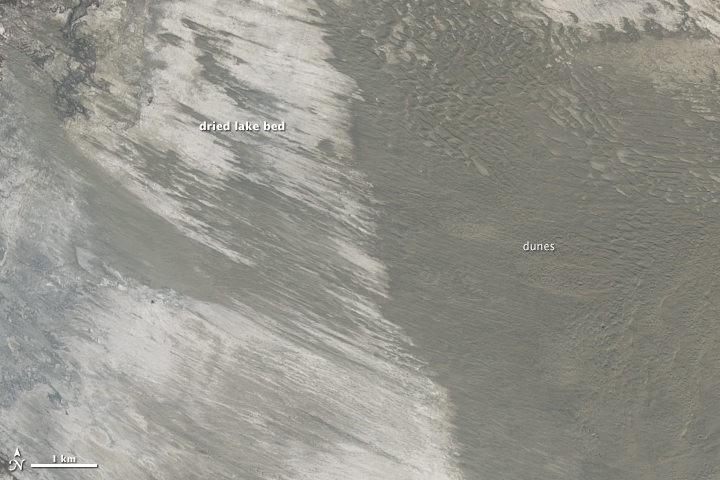 In 2014, the eastern lobe of the Aral Sea dried up, bringing attention to the human impact on the Central Asian landscape. But the Aral Sea isn’t the only lake in the region that is losing water. In northwestern China, near the border of Kazakhstan, Lake Ebinur has shrunk by 50 percent since 1955.

The Operational Land Imager (OLI) on Landsat 8 captured this image of Lake Ebinur (also called Aibi or Ebi lake) on October 20, 2013. The lake’s saline water appears light blue, while the dried lake bed, or playa, is white. Largely surrounded by mountains, Ebinur Lake sits at the bottom of a drainage basin with no outlet. The Borohoro Mountains lie to the south and the Dzungarain Alatau mountains lie to the north. Farms and settlements in the Boertala Valley are visible west of the lake.

Lake Ebinur’s size fluctuates from year to year due natural variations in snowmelt and rainfall. But human activity has played a key role in drawing down the lake over the past five decades, according to research published by scientists from the Chinese Academy of Sciences. The middle inset shows Bole, a bustling city of 425,000 people in the Boertala Valley that consumes significant amounts of water. Farmers in the valley (especially cotton farmers) also irrigate their crops with water that would otherwise go into the lake.

The drawdown of Lake Ebinur has exposed broad playas that are rich with salt and other minerals left behind when pools of water evaporate. Winds rush through a gap in the mountains to the north—the Dzungarian Gate—and regularly kick up saline dust storms on the playa. That salty dust is often carried east into the Junggar Basin.

In the bottom inset, note the sand dunes and the role that wind has played in sculpting the playa. Frequent dust storms have a range of undesirable effects downwind. For instance, saline dust contributes to desertification, damages soils, harms wetlands, and may be hastening the melting of snow and glaciers downwind.

You can watch a video about a World Bank effort to replenish Ebinur here.