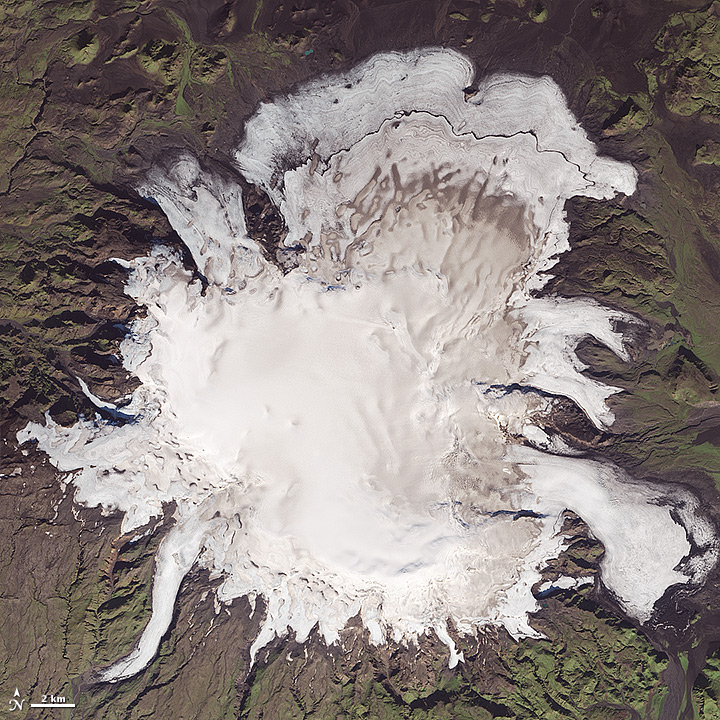 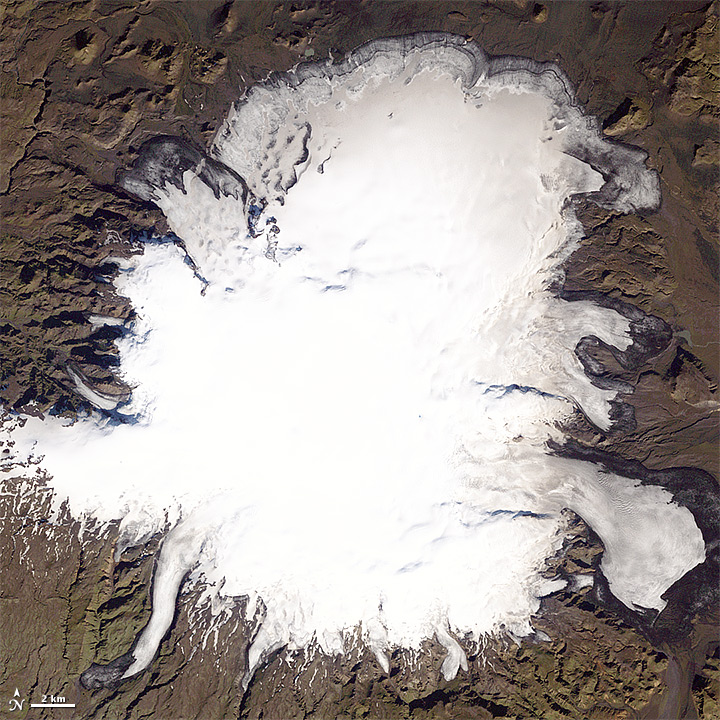 Mýrdalsjökull Then and Now

More than half of Iceland's numerous ice caps and glaciers sit near or directly over volcanoes, meaning fire and ice sometimes unite. For example, Mýrdalsjökull—Iceland's fourth largest ice cap—covers the Katla volcano. Located at Iceland's southern tip, Katla erupts about twice per century, with the last confirmed eruption in 1918.

"Katla has been ’due’ for a while now," said Throstur Thorsteinsson of the University of Iceland. "There have been episodes of seismic activity, but still no big eruptions." There have been occasional signs of small glacial outburst floods, called jÃ¶kulhlaups, an indication that small events may be occurring below the ice cap, he said, "but nothing has been well confirmed."

In the top image, the southwest-central part of Mýrdalsjökull has dimple-like features known as ice cauldrons—depressions caused by geothermal heat from the volcano below. Along the northern part of the ice cap, ablation has exposed brown bands of ash that were deposited by past eruptions. A few of the bands are likely from Hekla, a stratovolcano with relatively frequent eruption events. Across the middle of the ice cap, the dark surface can likely be attributed to more recent volcanic episodes.

Not all of the differences between the images are associated with volcanic activity. In 1890, Iceland's glacier coverage peaked for the first time since the end of the Ice Age. Since that peak, however, rising temperatures led many of the region's glaciers to begin retreating. A cooler climate in the 1940s allowed some glaciers to briefly advance, but since the 1990s, the pattern has been steady retreat.

A notable example is Sólheimajökull, the long outlet glacier on the southwest side of the ice cap, which has been retreating as much as 50 meters (164 feet) per year. This particular glacier is easily accessible to tourists, as the parking lot is moved almost annually.