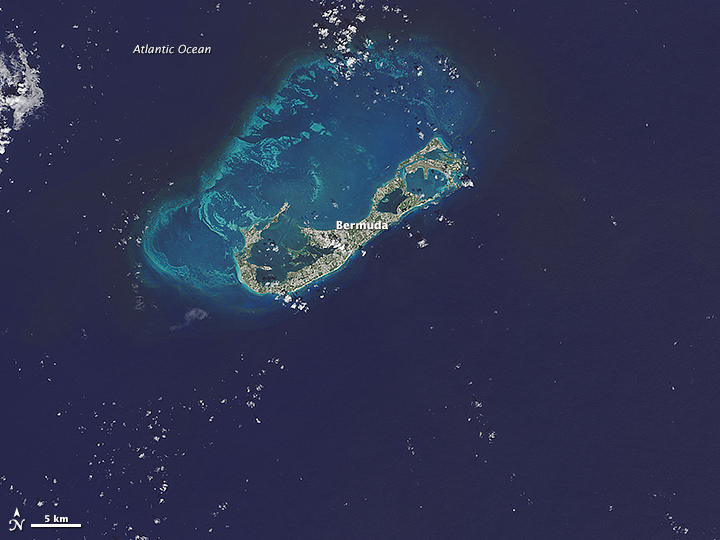 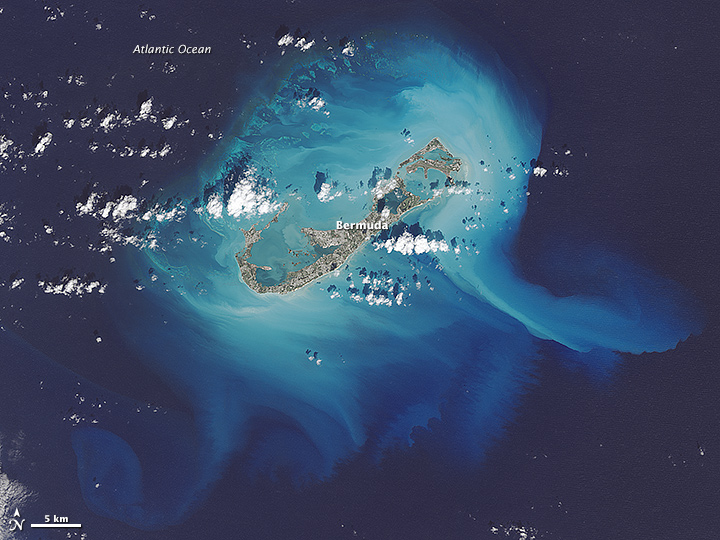 Gonzalo Stirs Up Sediment and the Carbon Cycle

On October 17, 2014, the eye of category 3 Hurricane Gonzalo passed right over Bermuda. The storm knocked out power to most of the island and caused between $200–$400 million in property damage, though it did not cause any deaths. The potent storm also stirred up the sediments in the shallow bays and lagoons around Bermuda, spreading a huge mass of sediment across the North Atlantic Ocean.

The Operational Land Imager on the Landsat 8 satellite acquired these two natural-color views of Bermuda. The top image was acquired on October 2, 2014, and the second was acquired on October 18, a day after Gonzalo passed through. Turn on the image comparison tool to see the movement of sediment, as well as some changes on the island itself.

After the storm, visible plumes of sediment stretch 25 to 30 kilometers from Bermuda. They extend mostly to the south and east of the island, suggesting that the last winds from the storm may have been out of the northwest. The suspended sediments were likely a combination of beach sand and carbonate sediments from around the shallows and reefs.

Coral reef and carbonate island environments—Bermuda is a classic example—produce large amounts of calcium carbonate (CaCO3) mainly in the form of aragonite and magnesian calcite. One island can produce as much CaCO3 as several hundred square kilometers of open ocean. But unlike the calcium carbonate produced in the open ocean by coccolithophores, foraminifera, and pteropods, the sediment produced by reefs stays on the reef flats (where there is coralline algae that also produces carbonate). It builds up over time and forms islands.

These stores of calcium carbonate sediments can get moved from the shallows to the deep ocean by storms or density flows. The strong winds of storms like Gonzalo can move a large amount of sediment off the shallow islands in a single event. Density flows can happen when the shallow water on the reef flat is cooled by a weather system, making it more dense than the surrounding ocean water, and it sinks to the deep ocean, taking sediments with it.

Storm-induced export of carbonate sediments into the deep ocean—where they mostly dissolve—is a significant process in the ocean’s carbonate and carbon cycles. It's also important for the eventual neutralization of excess carbon dioxide entering the oceans because of increasing atmospheric CO2 concentrations from fossil fuel combustion.

The dissolution of calcium carbonate is an important process in the carbon cycle; it is one of the ways that the oceans naturally balance the addition of carbon dioxide to ocean waters. However, as more CO2 is added to the surface waters due to rising atmospheric concentrations, it is becoming increasingly difficult for coral and coralline algae to make calcium carbonate.