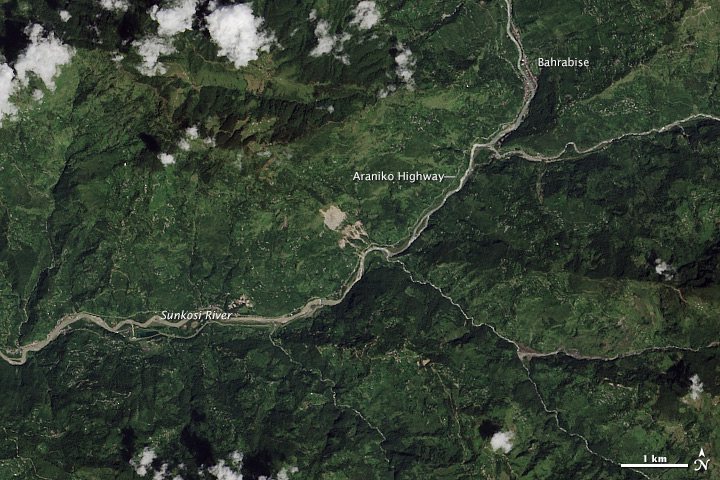 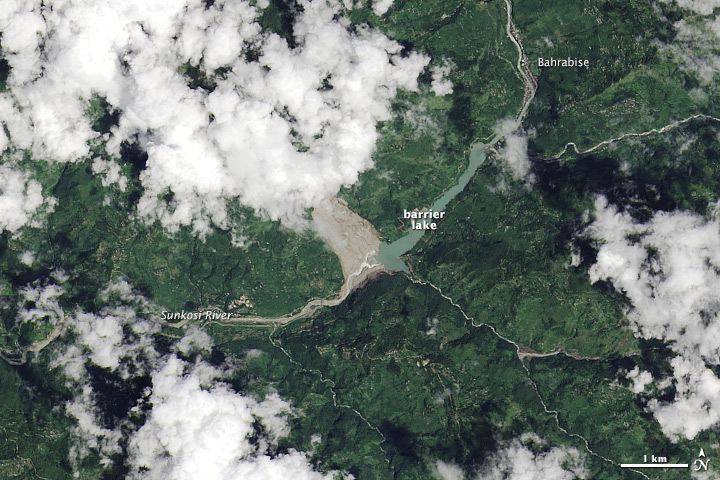 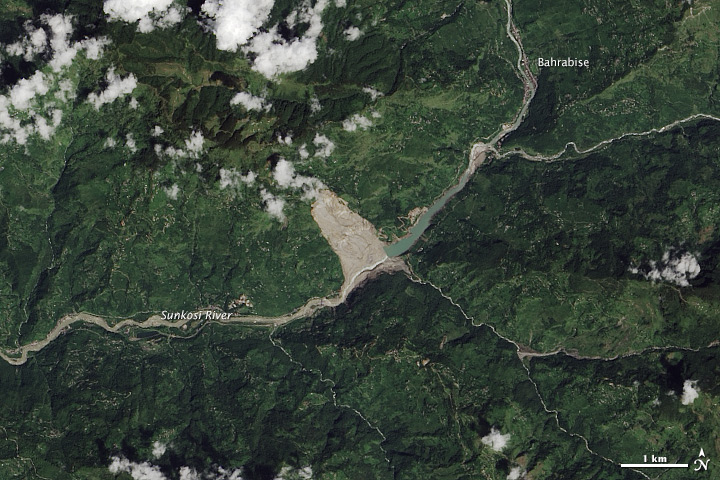 Before and After the Sunkosi Landslide

In the early hours of August 2, 2014, nearly 2 kilometers of hillside collapsed in rugged northern Nepal. Some 5.5 million cubic meters (194 million cubic feet) of rock and debris tumbled down into the Sunkosi (Sunkoshi) River valley. The initial slide buried dozens of homes in the village of Jure and killed 156 people.

The destruction on August 2 was just the beginning of the disaster. The landslide blocked the Sunkosi River and buried the Araniko Highway. For nine hours after the slide, a gauging station downstream showed the Sunkosi’s flow had stopped. Instead, water backed up behind a 55-meter tall (180-foot tall) earthen dam, creating an ever-growing lake that submerged dozens of houses and a hydropower substation. According to media reports, the loss of the power station led to a 10 percent decrease in Nepal’s electricity generating capacity, causing outages in the capital and elsewhere in the country.

The Nepalese army quickly set to digging and blasting two outlet channels into the dam in an attempt to drain the lake. With tens of thousands of people living in cities and villages downstream, geologists were concerned a sudden breach could cause devastating floods. However, 17 days later, the Nepalese Army was still digging, and the level of the lake had yet to change, most likely because efforts were focused on widening rather than deepening the outlet channels.

Finally, Nepalese authorities caught a break. Early on September 6, without warning, the dam breached, probably because of extra pressure after heavy rainfall increased the river’s flow. Fortunately, even though the surge of water damaged homes as far as 6 kilometers (4 miles) downstream of the dam, the floods were less severe than initially feared. Due in part to widespread evacuations of downstream villages, no casualties were reported.

While it was cloudy on most days the Landsat 8 satellite passed over the area, the Operational Land Imager (OLI) did capture a few images of the landslide and the aftermath. The top image shows the area on September 15, 2013, long before the landslide occurred. Notice what appear to be scars left by an earlier landslide. OLI took the middle image on September 2, 2014, a month after the landslide. The barrier lake covered a large portion of the river valley, stretching nearly as far as Bahrabise, a town a few kilometers upstream. On the earthen dam, the two manmade outlet channels are visible. OLI acquired the bottom image on September 18, 2014, after the dam had breached and the lake had receded significantly.