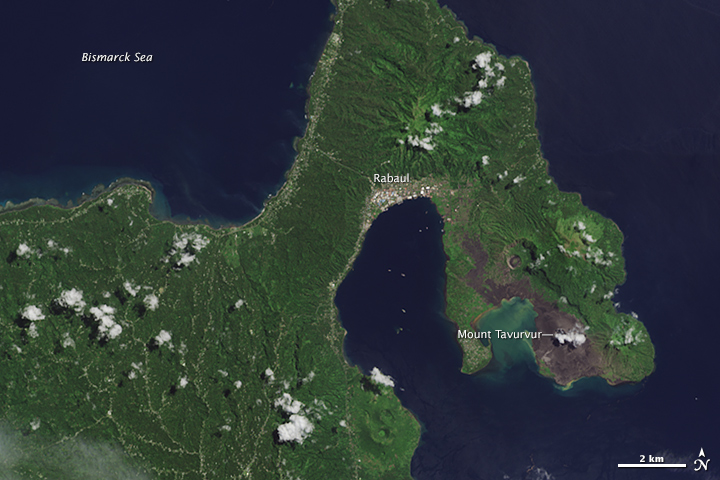 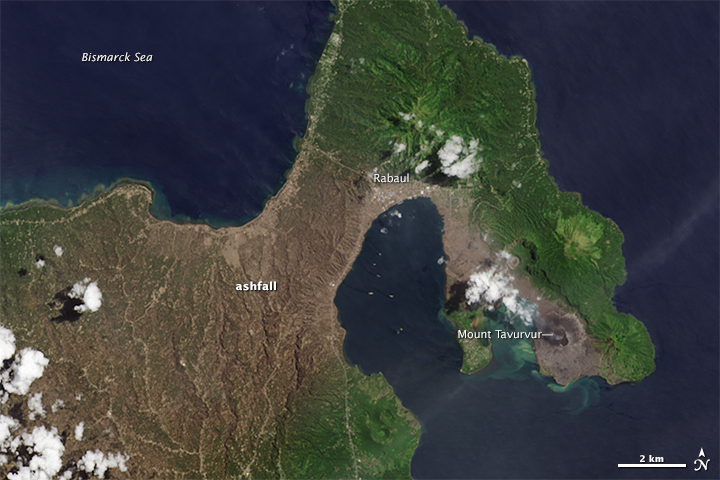 It is easy to see why German colonists made Rabaul the capital of German New Guinea in 1910. The town sits along the edge of a spectacular natural harbor and offered ships shelter from the many tropical storms that churn through the area. But there was one key thing the German planners overlooked: They were building inside the Rabaul caldera. In fact, the harbor that made the area so attractive as a port was actually formed when the sea partially flooded the caldera after a cataclysmic eruption about 1,400 years ago.

The town of Rabaul, the largest on the island of New Britain, has been paying for the mistake ever since. In 1937, an explosive eruption from Mount Tavurvur obliterated much of the town, killing 500 people in the process. In 1994, two nearby volcanoes—Mount Vulcan and Mount Tavurvur—burst to life simultaneously. A quick evacuation plan meant that just five people lost their lives, but so much ash piled up on buildings that about two-thirds of the town was destroyed.

Since then, eruptions have continued to rattle Tavurvur every few years. The latest occurred on August 29, 2014, when the stratovolcano roared to life. Though the eruption was modest by historic standards, it sent lava shooting hundreds of meters into the air and created a plume of gas and ash that billowed as high as 18,000 meters (60,000 feet), according to media reports.

Activity has begun to subside and the eruption has only caused minor damage so far, but it has spread ash far and wide. The Operational Land Imager (OLI) on Landsat 8 captured this view (lower image) of ash covering the landscape near Mount Tavurvur on September 2, 2014. For comparison, the top image shows the same area on April 27, 2014. Turn on the comparison tool to see how the landscape changed. Forests unaffected by ash are green, while ash-covered forests are gray.