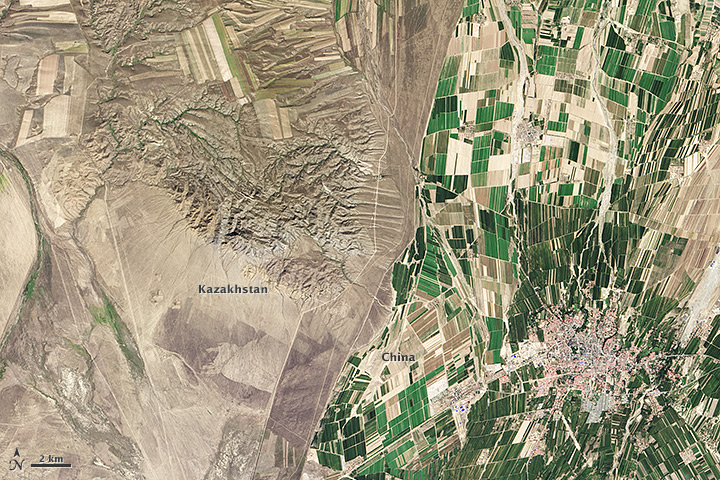 Where China and Kazakhstan Meet

While people often say that borders aren’t visible from space, the line between Kazakhstan and China could not be more clear in this satellite image. Acquired by the Landsat 8 satellite on September 9, 2013, the image shows northwestern China around the city of Qoqek and far eastern Kazakhstan near Lake Balqash.

The border between the two countries is defined by land-use policies. In China, land use is intense. Only 11.62 percent of China’s land is arable. Pressed by a need to produce food for 1.3 billion people, China farms just about any land that can be sustained for agriculture. Fields are dark green in contrast to the surrounding arid landscape, a sign that the agriculture is irrigated. As of 2006, about 65 percent of China’s fresh water was used for agriculture, irrigating 629,000 square kilometers (243,000 square miles) of farmland, an area slightly smaller than the state of Texas.

The story is quite different in Kazakhstan. Here, large industrial-sized farms dominate, an artifact of Soviet-era agriculture. While agriculture is an important sector in the Kazakh economy, eastern Kazakhstan is a minor growing area. Only 0.03 percent of Kazakhstan’s land is devoted to permanent agriculture, with 20,660 square kilometers being irrigated. The land along the Chinese border is minimally used, though rectangular shapes show that farming does occur in the region. Much of the agriculture in this region is rain-fed, so the fields are tan much like the surrounding natural landscape.