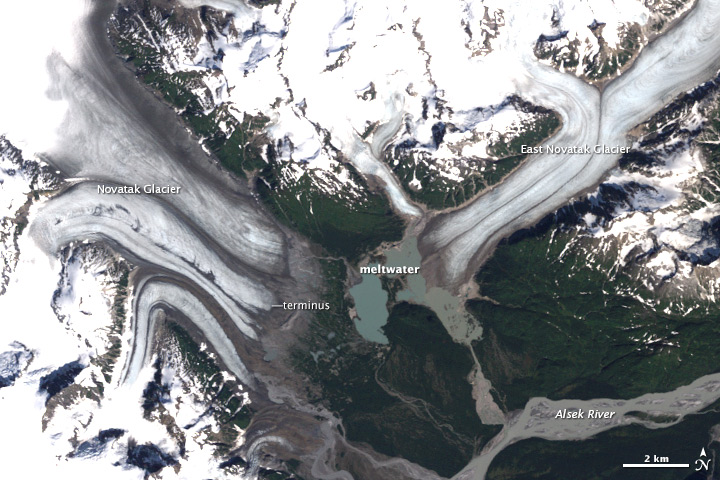 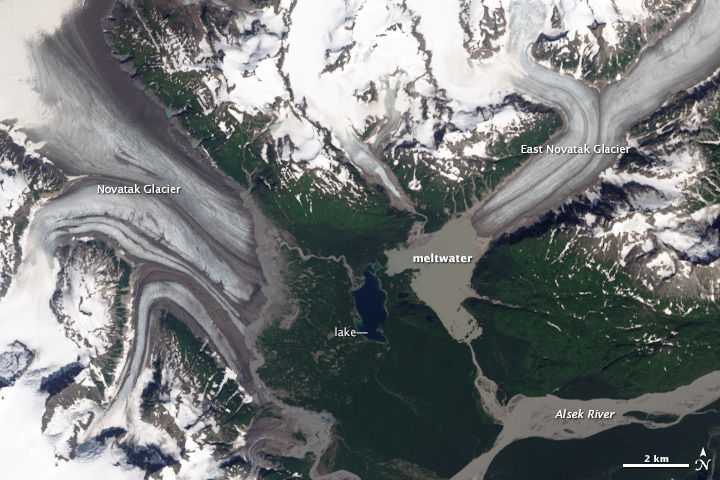 There are few people around to notice, but the ice in the Brabazon Range is changing rapidly—at least on the time scale of a glacier. Novatak and East Novatak glaciers, located just a few kilometers apart near the outlet of the Alsek River, are two of many retreating glaciers in southeastern Alaska. Over the last 25-years, the ends of Novatak and East Novatak have each retreated by more than a kilometer.

Snowfall in higher-elevation accumulation zones feed both glaciers. Over time, fresh snow compresses into ice that slides through alpine valleys and into a low-lying plain north of the Alsek. Meltwater collects near the ends of the glaciers, forming a sizable proglacial lake. This lake, filled with opaque, light-blue water, is drained by small streams that connect to the Alsek River a few kilometers to the south. The water’s distinctive color is caused by the presence of rock flour, a fine-grained silt formed by glacial ice grinding against rock.

This pair of satellite images illustrates how much both glaciers changed over a 26-year period and how that change affected the lake between them. The Thematic Mapper on Landsat 5 captured the top image on August 22, 1987. The Operational Land Imager aboard Landsat 8 acquired the bottom image on August 13, 2013. Turn on the comparison tool to slide between the two images.

Most of East Novatak is below 1,000 meters (3,000 feet) in elevation, relatively low for an alpine glacier. “The retreat of this glacier, like that of nearby Yakutat, indicates how susceptible the Alaskan glaciers with lower-elevation accumulation zones are to our warming climate,” noted Mauri Pelto, a glaciologist and professor at Nichols College in his blog, From A Glaciers Perspective.