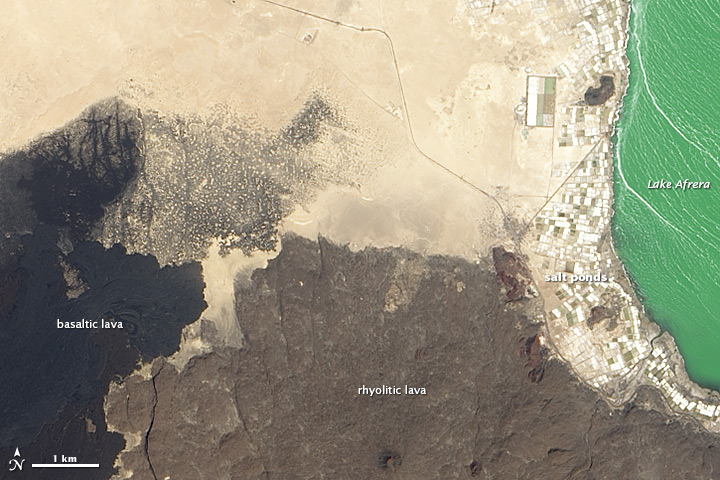 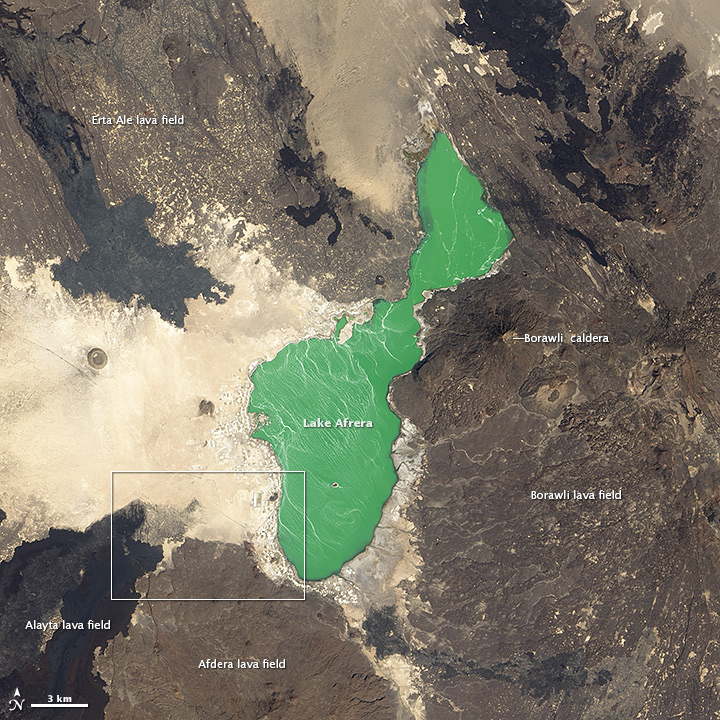 Today’s image is the answer to Earth Observatory’s July Puzzler.

In the Danakil Depression in northern Ethiopia, Earth is tearing itself apart. Three tectonic plates—the Arabian, Nubian, and Somalian—are sliding away from each other at a rate of a few centimeters per year. As they diverge, they leave a widening rift valley that will eventually become ocean floor. For now, Eastern Africa is one of the few places where it’s possible to see a spreading ridge—a feature normally found in the ocean—on dry land.

Danakil is also a good place to see lava fields extending across barren desert. The Operational Land Imager (OLI) on Landsat 8 captured this scene of the landscape around Lake Afrera (or Giulietti) on January 18, 2014. The top image is a detailed view of the area within the white box in the lower image. Sedimentary deposits of sand and evaporites appear tan; lava fields and flows are black or grey. The chemical composition of the lava, as well as how long it has been exposed to weathering, can affect its color.

Erte Ale, the most active volcano in Ethiopia, is the source of the lava field northwest of the lake. Borawli, an inactive stratovolcano, is the source of much of the lava to the east of the lake. The darker flow south of Lake Afrera came from Alayta, a large shield volcano that covers an area of 2,700 square kilometers (1,000 square miles). Immediately to the right of the Alayta is a lava field composed of a lighter-colored rhyolitic lava from Afdera. Young basaltic lava like that from Alayta tends to be black or dark grey. Over time, basalt usually takes on a lighter, redder tone as the iron within it oxidizes.

Afrera, the salty lake in the center of the image, is fed by natural hot springs in the northeastern and southeastern part of the lake. The white rectangles around the shore of the lake are evaporation ponds, which are used to produce salt. The small island within the lake, Franchetti Island, sits 100 meters (328 feet) below sea level, making it one of the lowest-lying islands in the world.

NASA Earth Observatory images by Robert Simmon, using Landsat 8 data from the USGS Earth Explorer. Caption by Adam Voiland. Congratulations to Samer Jamal and Angus Howden for being the first readers to solve the puzzler.