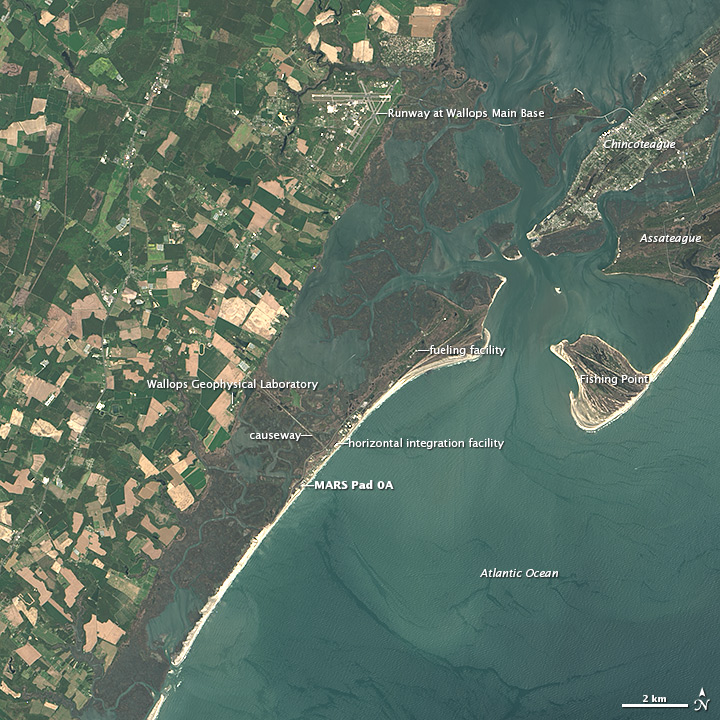 More than seventy year ago, wild ponies roamed the marshes and beaches of Wallops Island, a barrier island on Virginia’s Eastern Shore. Today, the island is the site of a thriving spaceport that launches several commercial and government rockets each year.

Wallops has a long history with rockets. On July 4, 1945, NASA’s predecessor—the National Advisory Committee for Aeronautics (NACA)—launched the first rocket from Wallops, making the island one of the oldest launch sites in the world. Since then, more than 14,000 rockets have lifted off. While most involved modestly-sized meteorological and sounding rockets, the completion of launch pad 0A at the Mid-Atlantic Regional Spaceport (MARS) in 2011 has made it possible to launch larger and more powerful rockets.

Residents from South Carolina to Massachusetts should have an opportunity to see one of these larger rockets if they look toward the island starting at 12:52 p.m. Eastern Daylight Time on July 13, 2014. At that time, a thirteen-story Antares rocket is scheduled to lift off from launch pad 0A. Weather permitting, the Antares or its contrail will be visible in Washington, DC, after 90 seconds; in Philadelphia after 120 seconds; in New York City after 150 seconds; and in Boston after 210 seconds.

TheÂ Antares will carry an unmanned Cygnus spacecraft loaded with 3,293 pounds (1,493 kilograms) of supplies to the International Space Station. Both the Antares and Cygnus were built by Orbital Sciences Corporation, a Virginia-based aerospace company.

The Operational Land Imager (OLI) on Landsat 8 captured this image of Wallops Island and the surrounding area on May 3, 2014. A variety of launch-related infrastructure is visible along the coast, including rocket storage and assembly buildings, launch pads, and protective sea walls. A causeway and bridge connect the island with the Delmarva peninsula.

On the mainland, the Wallops Geophysical Laboratory appears as a line of four white dots. To the north, the main campus of NASA’s Wallops Flight Facility serves as home base for a range of aircraft used to conduct earth science research. Wallops’ P-3 Orion, for instance, is the key aircraft supporting Operation IceBridge, a multi-year survey of polar ice.

Much of the Atlantic shoreline of Wallops island has been lined with a stone seawall to protect launch infrastructure from ongoing erosion and shoreline retreat. The natural action of waves and tides transports sand from north to south, but the hook-shaped tip of Assateague (Fishing Point) traps much of it and deprives Wallops Island of sand.Â A beach nourishment project completed in 2012 reinforced Wallop’s shoreline. But the arrival of Hurricane Sandy a few months later destroyed about 20 percent of the newly-built beach.