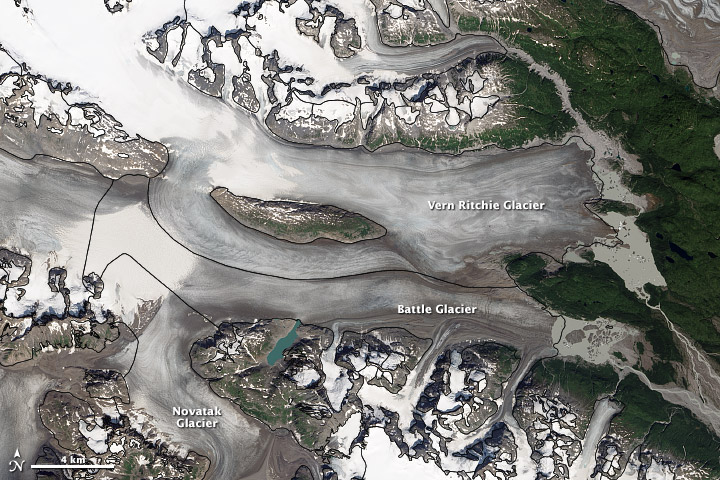 Many of the world’s coastal cities and populations are vulnerable to rising sea levels, but just how vulnerable is a question scientists are trying to answer. Sea levels are rising because water expands when it warms up, but also because ice has been melting. The biggest challenge in figuring out how much ice melt will cause sea levels to rise is the lack of information about how much ice glaciers currently hold, says the Intergovernmental Panel on Climate Change (IPCC). The recently published Randolph Glacier Inventory is the first global catalog of glaciers, and it was developed to help IPCC scientists improve estimates of sea level rise.

The top image shows the complete Randolph Glacier Inventory. The locations of glaciers are marked in blue. Glaciers outline the world’s major mountain ranges and fringe the ice sheets of Antarctica and Greenland. The map includes some 198,000 glaciers that cover approximately 726,800 square kilometers (280,600 square miles).

The true value of the Randolph Glacier Inventory is illustrated in the lower image. The inventory includes detailed outlines of the extent of each glacier—information that is critical in figuring out how much that glacier might contribute to rising sea levels. Acquired by the Landsat 8 satellite on August 13, 2013, the image shows Alaska’s Battle Glacier Complex, which contains at least three glaciers. Each glacier is defined separately in the inventory.

The outline matches the extent of the glacier in the satellite image very well largely because the outlines were created by mapping the each glacier’s extent in Landsat images supplemented by images from the Advanced Spaceborne Thermal Emission and Reflection Radiometer (ASTER), Ikonos, and SPOT-5 satellite instruments. The images used in the inventory cover 1999 through 2010 and are part of the Global Land Ice Measurements from Space Initiative (GLIMS) database. The outlines are not always perfect because fresh snow or debris on the glacier may disguise its extent in satellite images.

Previous attempts to catalog the world’s glaciers have not included outlines of each glacier’s extent. â€œIn order to model these glaciers, we have to know their individual characteristics, not simply an average or aggregate picture,â€ said Tad Pfeffer, the scientist who led a team of 74 scientists to develop the Randolph Glacier Inventory, in a press release. By combining these outlines with a measurement of the topography, scientists can estimate how much ice is in each glacier. A model of the glaciers can show scientists how the glacier might act in the future, and how much it could contribute to sea level rise.

The Randolph Glacier Inventory indicates that the world’s glaciers contain enough ice to raise sea levels 350 to 470 millimeters (14-18 inches) if they melt entirely. While this is just a fraction of what the Greenland and Antarctic ice sheets could contribute if they melted completely (63 meters or 200 feet), these glaciers are likely to be the primary contributors to sea level rise in the near term. The IPCC estimates that global sea levels will rise 0.26 â€“ 0.98 meters (0.85 â€“ 3.22 feet) by 2100, depending on which climate scenario unfolds.