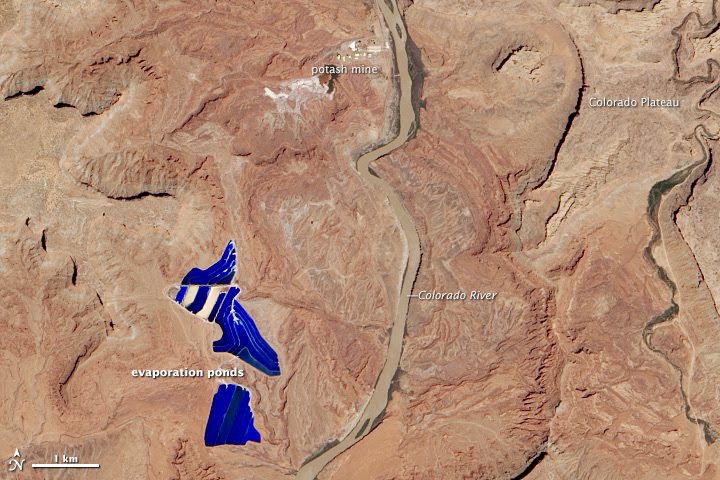 Potash Mine Near Moab, Utah

Take a look at the food on your plate. If you live in the United States, there’s a good chance that a potash mine like this one in Moab, Utah, helped get it there. The mine produces muriate of potash, a potassium-containing salt used widely by farmers in fertilizer.

Most potash forms in arid regions when inland seas or lakes dry out. As the water evaporates, it leaves behind potassium salt deposits. Over geologic time, sediment buries these deposits and they become potash ore. The ore at Moab—which actually lies about 1,200 meters (3,900 feet) below the surface and within the Paradox Formation—began to form about 300 million years ago.

In Utah, the miners pump water deep underground to reach the potash ore. Potash is soluble, so water dissolves it into a brine. That brine gets pumped into underground caverns, where the potash continues to dissolve. Eventually, a highly-concentrated brine is pumped all the way to the surface and into one of the evaporation ponds shown above.

As the water evaporates, potash and other salts crystallize out. This evaporation process typically takes about 300 days. The water is dyed bright blue to reduce the amount of time it takes for the potash to crystallize; darker water absorbs more sunlight and heat. The crystals of potash and salt are then sent to a facility to be separated through a flotation process. 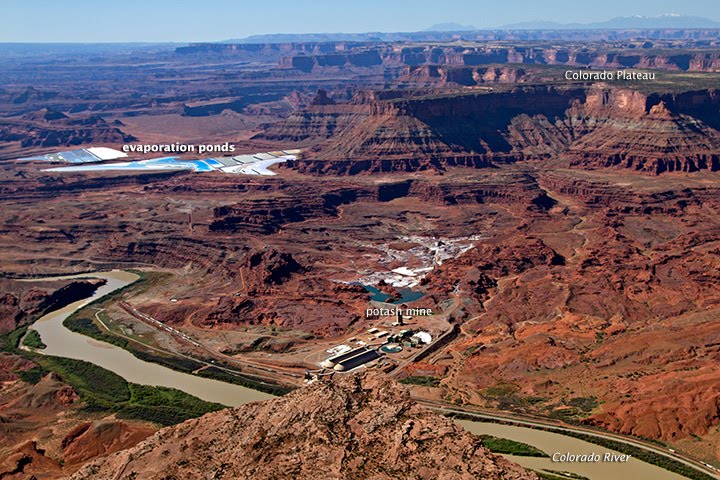 The top image was acquired by the Operational Land Imager (OLI) on the Landsat 8 satellite on May 13, 2014. The bottom image is a photograph taken by an EcoFlight pilot on October 12, 2011.