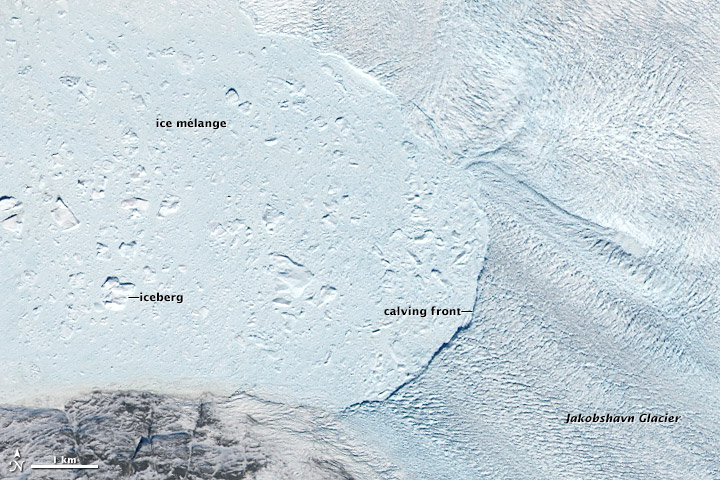 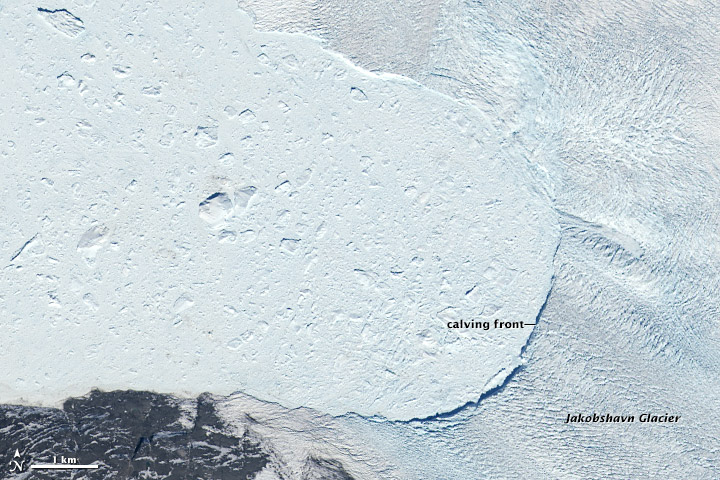 It’s easy to think of ice as still and rigid. But glaciers are active—flowing and shifting, advancing and retreating. Among the world’s most dynamic glaciers is Greenland’s Jakobshavn Isbrae, which showed its active nature with a large calving event at the end of May 2014. Sometime between May 9, when the Landsat 8 satellite acquired the top image, and June 1, when the second image was acquired, the glacier shed kilometers of ice from its front.

The calving event is visible in the comparison between the two images. Linear patterns mark the surface of the glacier, visible currents in a river of ice. The glacier has two branches, the primary southern branch (shown here) and a secondary northern branch (visible only in the wider larger image). In the June 1 image, a large area of the southern branch and a smaller section of the northern branch have changed. Ice has crumbled off of the glacier front into the mélange, the jumble of floating ice downstream from the glacier. Turn on the comparison tool to get a better sense of how much ice broke away.

Though large and dramatic, this event is not unusual for Jakobshavn or other glaciers, which accumulate snow during the winter and shed ice by calving. Greenland’s many glaciers drain ice from the central ice sheet; but even in a land of glaciers, Jakobshavn is prolific. Since 2000, Greenland has lost some 739 gigatons of ice, and approximately 30 percent of that loss came from Jakobshavn and four other glaciers. That loss, along with surface melting, has caused Greenland’s ice sheet to start losing more ice than it gains. Jakobshavn has contributed one millimeter to sea level rise between 2000 and 2011 from calving events like this one.

“A good indicator of what a calving event means at a particular glacier is the longer-term position of the calving front,” says NASA Goddard glaciologist Kelly Brunt. This year’s calving event continues a trend that goes back more than a century. Jakobshavn receded more than 40 kilometers (25 miles) between 1850 and 2010. But the retreat is getting faster.

Jakobshavn is Greenland’s fastest-moving glacier, and the flow rate is variable with spurts of speed in the summer and additional variation from year to year. In the summer of 2012, Jakobshavn accelerated to speeds not seen before, surging at a rate of 17 kilometers (10 miles) per year. On average, the glacier moved nearly three times faster in 2012 than it did in the mid-1990s. “When calving fronts recede to a point that we haven’t seen in decades, then that glacial system is probably out of balance, losing more ice than it gains,” says Brunt.

The acceleration is related to the shape of the ground beneath the glacier. “You can think of it like the fjord is the piping tip on a bag of decorative cake frosting. If you change the tip from a small diameter to a bigger diameter, the icing will squeeze out faster and more easily,” says Ian Joughin, a glaciologist at the University of Washington who has been studying Jakobshavn.

The end of Jakobshavn is currently over a deep gouge in which the bedrock is about 1,300 meters (4,300 feet) below sea level, which means that the glacier has a very large nozzle to flow out of. Until the glacier retreats to a shallower region, it will probably continue to flow and retreat quickly, making calving events like this one increasingly common.