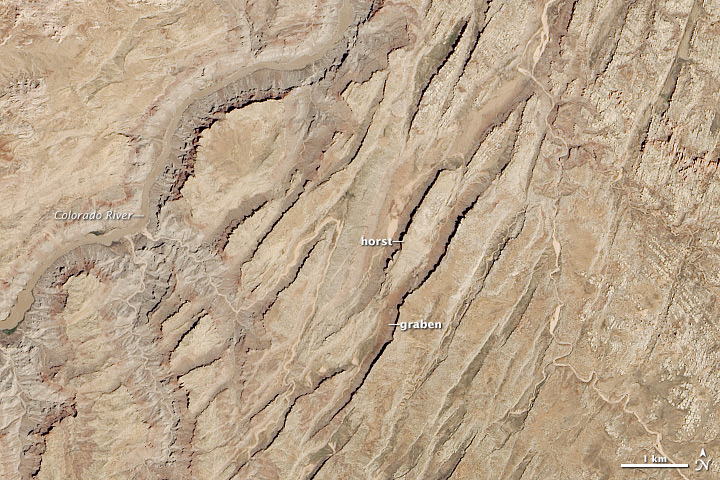 In the Needles District of Canyonlands National Park, a group of parallel valleys cut across the rust-colored surface of the Colorado Plateau. The features—grabens—are caused by blocks of rock sinking between parallel faults in the Earth. Most of the grabens are 25 to 75 meters (82 to 246 feet) deep and extend for about 25 kilometers (16 miles).

The origin of these distinctive features dates back some 300 million years, when a shallow inland sea covered the area. Salty deposits called evaporites accumulated along the bottom of the ocean basin. As more material was deposited, the evaporite layer grew to be more than a thousand meters thick in some places.

Environmental conditions gradually changed over time. During some periods, ocean levels were higher and deposited layers of limestone. When sea levels were lower and the crust was exposed to air, layers of sandstone, mudstone, and siltstone were laid down on top of the evaporites. The result was a layer-cake of rock formations that alternate between shades of red, white, gray, and brown.

About 60 million years ago, the oceanic plates in the Pacific began sliding underneath North America, pushing the Colorado Plateau upward. During this period, a network of cracks—some of which would later became the walls of the grabens—formed in weak parts of the rock.

Starting about 10 million years ago, the Colorado River started chiseling into the plateau, carving a deep canyon. When the river sliced into the evaporite layer about 55,000 years ago, the relatively soft rock began to erode. Over time, the whole rock layer became so saturated with water that it began to shift and move westward toward the river. As the evaporite layer moved, the overlying blocks of rock sank, creating the grabens. The sinking blocks also forced adjacent rock upward, forming elevated features known as horsts.

The Operational Land Imager (OLI) on Landsat 8 captured this image of Canyonlands’ grabens on May 13, 2014.