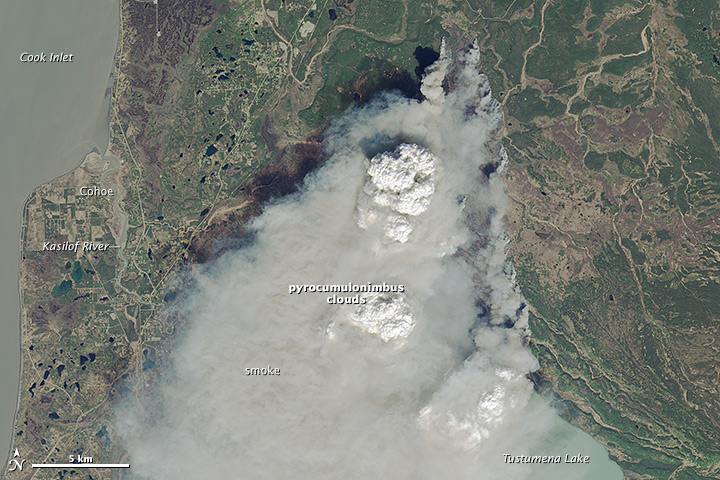 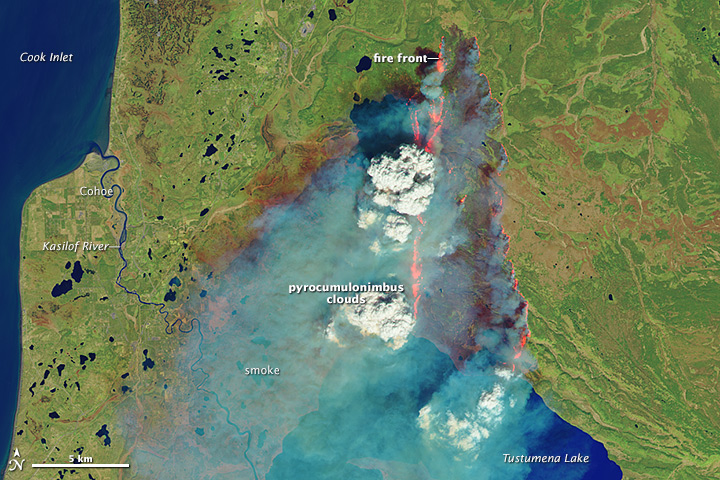 Spring came early to southern Alaska in 2014, bringing warm and dry weather. By the end of May, vegetation was already primed to burn. So when a fire broke out on the Kenai Peninsula on the evening of May 19, 2014, it quickly blew up into a massive wildfire. Called the Funny River Fire, it had burned more than 43,000 acres by 5:30 p.m. local time on May 21.

The Operational Land Imager on the Landsat 8 satellite acquired these images at 1:13 p.m. local time on May 20. The top image shows the scene in natural color, while the lower false-color image incorporates short wave infrared light (bands 6, 5, 3). Each view provides unique information about the fire.

Smoke is the dominant feature in the top image. The dense smoke masks the fire, which is trouble for firefighters trying to control the blaze from the air. Billowing above the smoke plume are at least two pyrocumulonimbus clouds—thunderclouds formed when superheated air rises above an intense fire. Hail, lightning, and strong winds often occur where there are pyrocumulonimbus clouds. These clouds also loft smoke high into the atmosphere, allowing it to travel long distances. The smoke plume for the Funny River fire arched hundreds of kilometers across the Gulf of Alaska and affected air quality across the Kenai Peninsula and south-central Alaska.

The infrared light in the second image cuts through the smoke to show the fire front and burned area. Smoke is blue, while the higher, cooler pyrocumulonimbus clouds are white. The newly burned land is dark brown. The active fire area is orange and appears to be burning on both the eastern and western edges of the burn area.

The vegetation around the fire has patches of brown-red in the lower image. This could be the burn scar from an old fire, or it could be insect-killed trees. The fire is burning in the Kenai National Wildlife Refuge, which was the center of a spruce bark beetle outbreak that spread across four million acres of south-central Alaska. Firefighters noted that efforts to clear beetle-killed trees is now limiting the fire’s growth.