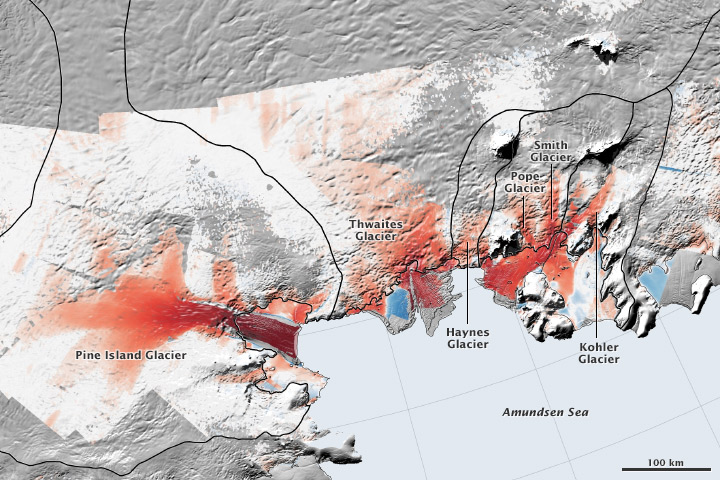 Two studies published this week conclude that a section of the West Antarctic ice sheet has reached a point of inevitable collapse, an event that would eventually raise sea levels more than a meter (three-plus feet). The first study, led by Eric Rignot of the Jet Propulsion Laboratory, used NASA satellite and airborne observations to measure how glaciers have been retreating in the region. The other study, led by Ian Joughin of the University of Washington, used a computer model to compare observations of recent melting with projected melt scenarios to see which matches reality best so far. Both studies conclude that the Amundsen Sea segment of the ice sheet has begun an irreversible decline that will result in its loss, possibly as soon as the next few hundred years.

Called the weak underbelly of the West Antarctic ice sheet, the Amundsen Sea region contains several fast-moving glaciers, including Pine Island, Thwaites, Haynes, Pope, Smith, and Kohler. Many Antarctic glaciers have offshore ice shelves that hold them in place like a dam. But there is very little fixed, offshore ice in the Amundsen Sea, so the glaciers flow freely. These rivers of ice drain one third of the West Antarctic ice sheet.

In a separate study published in March 2014 in Geophysical Research Letters, Rignot and colleagues Jeremie Mouginot and Bernd Scheuchl found that these glaciers have been speeding up, as shown in the map above. Changes in ice flow between 1996 and 2008 are shown in red (accelerating) and blue (slowing). The changes were calculated from a variety of satellite observations, including visible light and radar observations that measure how fast the surface is moving, and satellite altimeter measurements of the height of the ice (for estimating thickness). Most of the glaciers have been flowing faster, and the changes extend far inland.

Rignot’s May 2014 recent paper examines why the glaciers have been flowing more quickly and what that means for the future of the Amundsen Sea Embayment. First, the team identified the grounding line for each glacier; that is, the place where the ice is anchored to the coast or seafloor. Beyond that point, the glaciers float on ocean water. The floating segments rise and fall with the tides. Rignot and his team used satellite radar interferometry to map changes in ice height over time and identify the grounding lines.

“The grounding line is buried under a thousand or more meters of ice, so it is incredibly challenging for a human observer on the ice sheet surface to figure out exactly where the transition is,” Rignot said. “This analysis is best done using satellite techniques.”

Across the region, grounding lines retreated significantly between 1992 and 2011. For instance, the Pine Island glacier grounding line has moved 31 kilometers inland. Smith/Kohler glaciers retreated 35 kilometers, Thwaites retreated 14 kilometers, and Haynes retreated 10 kilometers. This movement suggests further declines in the future. Most melting happens from below, when warm ocean currents undercut and thin the ice. Water also eliminates friction beneath the glacier, allowing ice to flow more quickly. As the ice flows, it thins and becomes lighter, allowing more of it to float and the grounding line to retreat more.

The glaciers in the Amundsen Sea region have entered this vicious cycle, and there seems to be nothing to slow or stop the melt. The land beneath the glaciers lies below sea level, and it slopes down toward the center of the ice sheet. Any water that flows beneath the glaciers will move downhill away from the coast, undercutting the glaciers even more. Rignot’s team analyzed the underlying topography and found no hills or bumps that might stop the water or this melt cycle. Rignot explains how these elements come together in the following animation:

These three things—the accelerating melt rate, the retreating grounding lines, and no speed bumps—all point to the eventual collapse of the Amundsen Sea portion of the West Antarctic ice sheet. That conclusion is supported by Joughin’s modeling study, which found that the Thwaites glacier is on pace to collapse in as little as 100 to 200 years (some scenarios give the glacier as many as 1,000 years). This segment of the ice sheet contains enough ice to raise sea levels by 1.2 meters (4 feet).