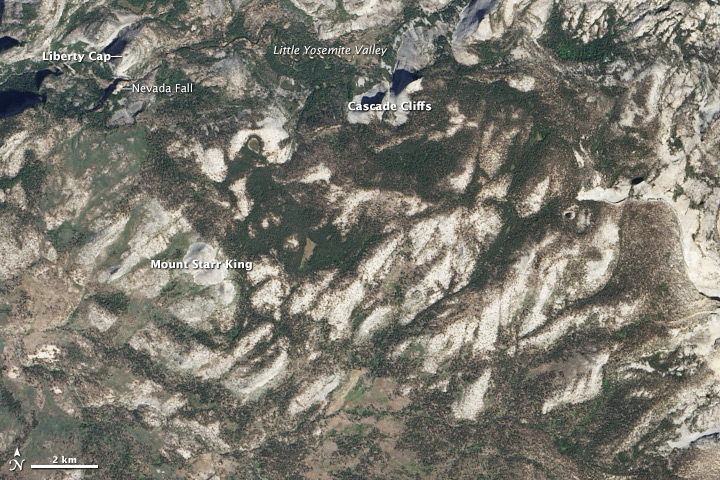 This Image of the Day is the answer to the April puzzler.

If you visit Yosemite National Park in California, it’s impossible to miss the granite. You'll find the tough, grainy rock in the park’s spectacular cliffs, soaring domes, and ubiquitous boulders. This image shows part of Yosemite as observed on September 13, 2013, by the Operational Land Imager (OLI) on the Landsat 8 satellite. The massive outcroppings of granite that make up Cascade Cliffs, Liberty Cap, and Mount Starr King appear gray. The patches of green are forests.

To understand where all that granite came from, you have to go back 100 million years, when the land that makes up today’s Sierra Nevada was vastly different. The Pacific shoreline ran through what is now Central California, and a long line of volcanic mountains were arrayed along that coast—much like the Andes Mountains in South America today. Eruptions spilled lava across the surface of the Sierra Nevada’s volcanoes, forming layers of fast-cooling extrusive igneous rocks. But those rock layers have long since eroded away from the surface.

Instead, Yosemite granite had a deeper source. Huge volumes of magma—hot, molten rock—pooled up in large chambers below that ancient volcanic landscape. Just as ice crystals develop on puddles on freezing nights, mineral crystals develop when magma cools slowly. Underground magma chambers offer ideal conditions for slow cooling, so the rocks that formed were grainy and mineral-rich granite. As the magma cooled, dark-colored crystals of hornblende and biotite were some of the first minerals that formed crystals, while lighter-colored orthoclase feldspar and quartz crystals formed at cooler temperatures.

All of the interlocking mineral crystals help make granite a particularly strong rock. That strength helps explain how many of Yosemite’s most dramatic landscapes formed. Many millions of years after the granite formed deep underground, it was uplifted by plate tectonic processes and then scoured by ice. As glaciers pushed through river valleys and over or around the Sierra Nevada, weaker rocks eroded away. The huge blocks of erosion-resistant granite left behind define Yosemite’s landscape today.

NASA Earth Observatory image by Robert Simmon, using Landsat 8 data from the U.S. Geological Survey. Caption by Adam Voiland. Congratulations to Mike G. for being the first to identify the location.