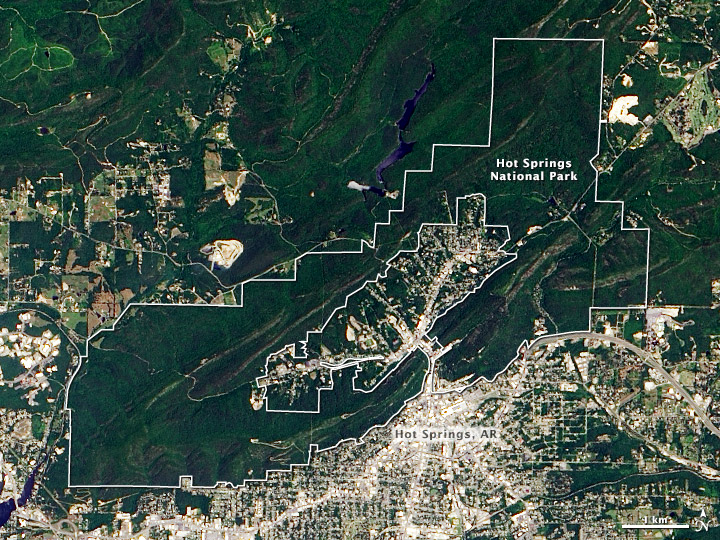 National Parks usually make us think of pristine landscapes untouched by human civilization. Most of the 58 national parks in the United States fit that mold, but there are a few exceptions. Arkansas’s Hot Springs National Park, the country’s smallest and most urban, is one of them.

The Operational Land Imager (OLI) on Landsat 8 acquired this image of the park and surrounding area on June 14, 2013. The 5,550-acre (2,250-hectare) park encompasses a few ridges in the Ouachita Mountains. Hot Springs, a city of 96,000 people, lies at the southern edge of the park and partly within its borders. A stretch of historic bathing facilities—built from the 1890s to 1920s around a series of natural hot springs—serves as the park’s main attraction.

Since the Ouachita Mountains are not volcanically active, and geologists find no evidence of magma near the surface, why do 700,000 gallons of 143°F (62&degC) water bubble every day from springs near the base of Hot Springs Mountain? It's the result of geothermal gradients, the tendency for temperatures to increase as you dive deeper into Earth’s interior.

Temperatures rise by roughly 1°F (0.6°C) for every 70 feet (20 meters) you descend into the Earth, thanks to increasing pressure and the radioactive breakdown of particles in the planet’s core. According to carbon dating studies, the water that emerges today began its journey thousands of years ago. Rainwater infiltrated porous and highly fractured layers of sedimentary rock (mainly chert) northeast and east of the park. That sedimentary rock acts like a sponge, absorbing water and slowly funneling it to a reservoir more than 4,500 feet (1,400 meters) below the surface. As the water descends, it warms up.

Although water takes about 4,000 years to descend, it rises quickly. The reservoir intersects with a series of larger cracks and faults in Earth’s crust that squeeze water back toward the surface in less than a year—faster than the water can cool. Since hot water absorbs and dissolves particles, it becomes enriched with trace minerals that have attracted bathers for decades.