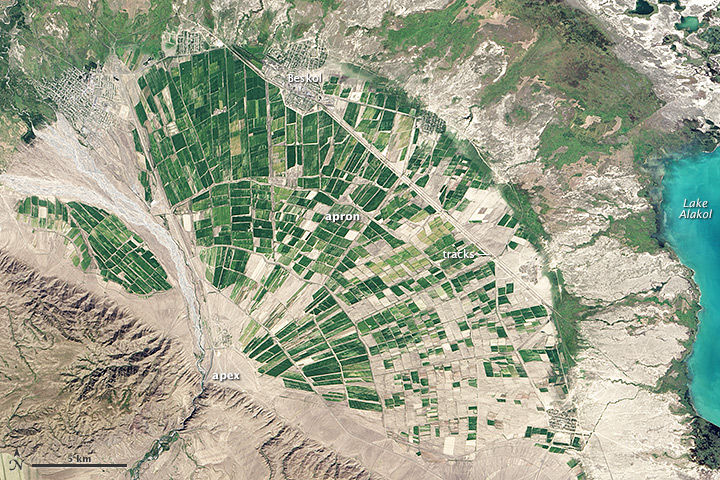 Mountain streams are usually confined to narrow channels and tend to transport sizable amounts of gravel, sand, clay, and silt—material that geologists call alluvium. The type and quantity of alluvium transported depends on the volume of the water flow and the gradient of the stream. Larger rivers pick up more alluvium than smaller ones; fast-flowing streams on steep slopes transport coarser sediment than slow-moving ones on shallow slopes.

When a rushing stream emerges from the mountains onto a relatively flat valley or basin, it often spreads out to become a braided stream with multiple, interlacing channels. As a mountain stream moves into a flat area, it also slows down. It loses its capacity to carry as much alluvium and deposits the excess in sandbars throughout the channels. Over time, the channel migrates back and forth, creating fan-shaped deposits known as alluvial fans.

The narrowest point of an alluvial fan—closest to the mountain front—is known as the apex; the broader part is called the apron. Alluvium deposited closer to the apex tends to be coarser than the material that makes up the apron. Alluvial fans are more likely to form in deserts because there is plenty of loose alluvium and not much vegetation to prevent stream channels from shifting.

The Operational Land Imager (OLI) on Landsat 8 captured this view of an alluvial fan in Kazakhstan’s Almaty province on September 9, 2013. In the lower left of the image, the Tente River flows through a narrow channel in the foothills of the Dzungarian Alatau range. Where the Tente emerges from the hills near Lake Alakol, it spreads out and becomes a braided stream. The movement of the channel over time has left a large fan that’s about 20 kilometers (12 miles) across at its widest point.

Alluvial fans in arid areas are often used for agriculture because they are relatively flat and provide groundwater for irrigation. This fan is no exception. The blocky green pattern across the apron are fields or pasture land. A number of towns and villages, including Usharal and Beskol, are visible along the fan’s outer edge. The straight feature cutting through Beskol and along the northeastern portion of the fan are railroad tracks.