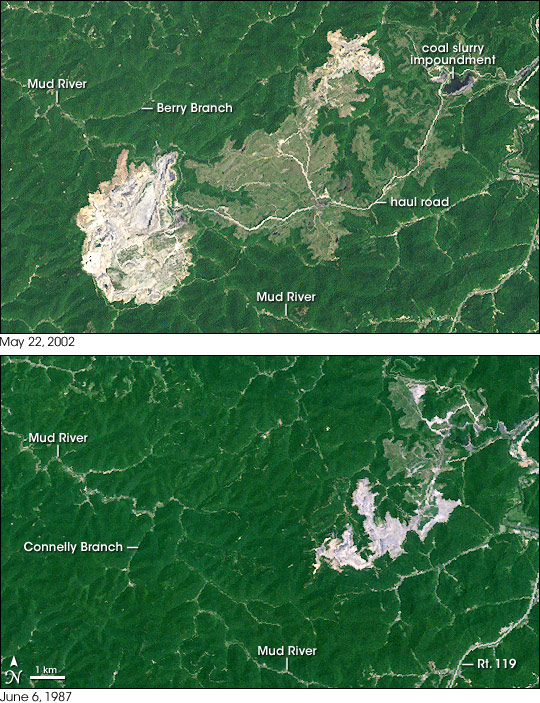 Over the past two decades, the scale of surface coal mines in the coalfields of Appalachia has grown dramatically, and the controversy over the social and environmental costs of this mining method has escalated as well. The largest of these mines are called mountaintop removal mines because coal operators literally remove the tops of mountains to reach coal seams. The waste rock and dirt is piled into nearby hollows and streams in huge earthen dams called valley fills.

Most of the largest mountaintop removal mines occur in southern West Virginia. This pair of images shows the growth of a mountaintop removal in the headwaters of Mud River in Boone County, West Virginia, between 1987 (bottom) and 2002 (top). In 1987, most of the mountainous, heavily forested terrain in the Mud River watershed was still undisturbed, although mining had already occurred north of Rt. 119. By 2002, the Hobet-21 Mine, operated by Arch Coal and its subsidiaries, had expanded across a large area on either side of the Mud River. At least one stream, Connelly Branch, was turned into a valley fill.

Areas to the northeast of the river appeared to have been partially reclaimed; these sites are generally planted with grass to control erosion. The partially re-vegetated land is a much lighter green than the surrounding forests. Other prominent features include a coal hauling road that runs between the active mine site and a coal slurry impoundment at the top right part of the scene. These impoundments contain the coal slurry (sludge) left over from washing the coal. Since the 2002 image was captured, the western section of the mine has continued to expand. In December 2007, its northern extent nearly reached Berry Branch.

To learn more about mountaintop removal mining in Appalachia and its effect on communities and natural resources, please read the Earth Observatory feature article Coal Controversy in Appalachia.

You can also download a 28.5-meter-resolution KMZ file comparing the Hobet-21 mine site in 1987 and 2002 suitable for use with Google Earth.