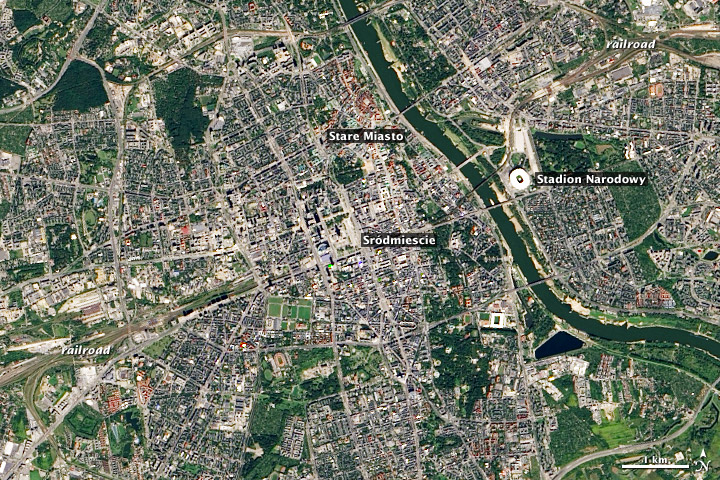 The majority of buildings and infrastructure in the capital of Poland were obliterated by World War II. But the spirit of Warsaw survived, and from the wreckage the people rebuilt a part of their 800-year history alongside a thoroughly modern city. The Operational Land Imager (OLI) on the Landsat 8 satellite acquired this image of Warsaw on September 8, 2013.

The city of 1.7 million people is located along the Vistula River, one of the few large rivers in Europe that has not been completely regulated or channeled. The center of Warsaw sits mostly on bluffs above the west bank, while the lowlands close to the river on the east bank have deciduous woodlands and sandy shores. Dikes have allowed the east bank floodplain to be developed, though a bit of the rural heritage remains.

Stare Miasto is the “Old Town,” the historic center of the city, which was pulverized during and after the Warsaw Uprising of August 1944. Many of the historic structures were reconstructed in the likeness and layout of the buildings that stood before the war, leading UNESCO to declare the area a World Heritage site. “The reconstruction of the historic centre (so that it is identical with the original) symbolizes the will to ensure the survival of one of the prime settings of Polish culture and illustrates...the restoration techniques of the second half of the 20th century,” UNESCO declared.

“ÅšrÃ³dmieÅ›cie” is the new center or downtown, a mixture of high-rise modern glass, steel and concrete (similar to many U.S. cities) and a few buildings that survived through the war. The “Royal Route” runs north-south through Stare Miasto and ÅšrÃ³dmieÅ›cie as the main tourist thoroughfare of the city. Railroad lines cut across the entire scene from lower left to upper right, diving underground briefly through the city center.

East of the Vistula, the Stadion Narodowy is a retractable-roof stadium for professional football (soccer) and other public purposes—including the United Nations Climate Change Conference (COP-19) in November 2013.