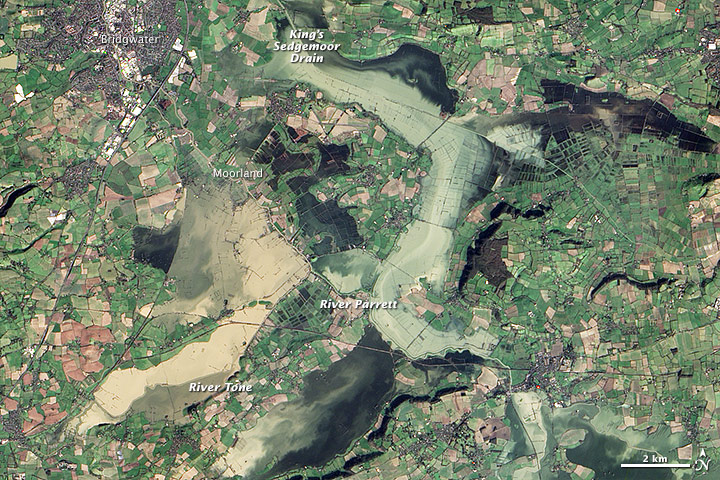 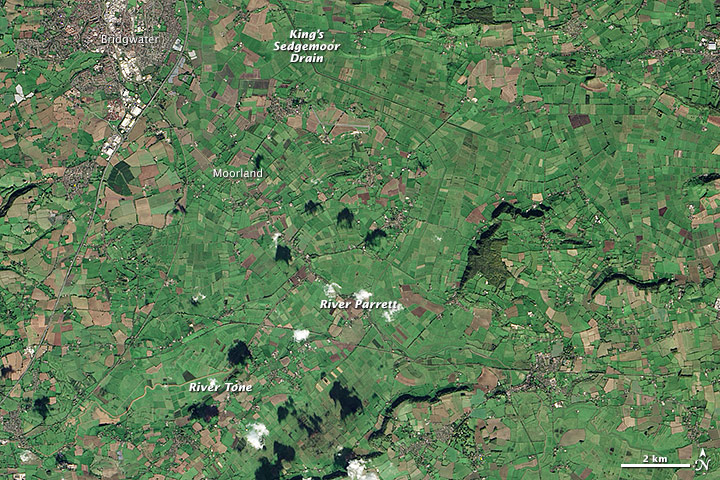 A low-lying tract of land in southwestern England known as the Somerset Levels stands just a few meters above sea level; some of the lowest parts even dip below sea level. A natural marshland, the Levels were drained and reclaimed for agriculture over the past few hundred years. However, the marshy character of the land still reasserts itself on occasion.

In December 2013 and January 2014, a series of storms dropped 372 millimeters (15 inches) of rain on southern England, making that two-month period the wettest on record since 1910. The storms and rain have continued into February. Since January, both the River Parrett and River Tone spilled over their banks and flooded sections of the Levels. By mid-February, an estimated 17,000 hectares (66 square miles) and 150 homes were swamped.

The Advanced Land Imager (ALI) on NASA’s Earth-Observing-1 satellite acquired this image on February 16, 2014. For comparison, the lower image shows Somerset Levels as seen by Landsat 8 on November 4, 2013.

On February 16, brown, sediment-laden water covered large tracts of farmland. While the town of Bridgewater was still dry, villages such as Moorland, Westonzoyland, Burrowbridge, and Othery were either flooded or nearly so. Neither the King’s Sedgemoor Drain nor pumping efforts by the British government could slow the rising waters enough to prevent severe flooding.

Although the Somerset Levels have a long history of flooding, this latest round has reignited a debate about the usefulness of dredging, a process that involves deepening and widening river channels by removing silt. Some observers argue that dredging the river more regularly would prevent damaging floods from occurring. Others say that regular dredging does little to prevent floods, causes ecological damage to ecosystems, and is too expensive to pursue.