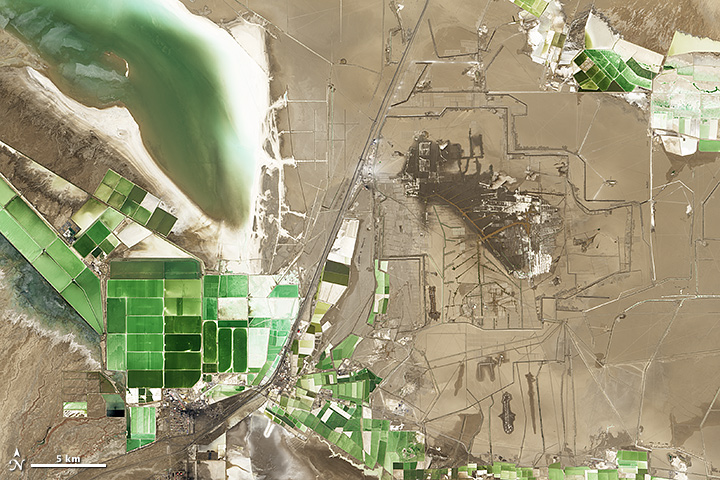 Lake Qarhan is the largest salt lake in China, covering some 5,856 square kilometers (2,261 square miles). The lake is a playa, a basin that fills with water only occasionally. The playa contains nine smaller but more permanent shallow salt lakes. The largest of these lakes is Dabuxun, shown in this image taken by the Landsat 8 satellite on November 15, 2013. Located on the a high plateau, water evaporates readily from the shallow lakes, leaving behind an abundance of minerals, including sodium chloride, potassium, bromine, halite, gypsum, and magnesium chloride. The square evaporation ponds shown here are used to mine those minerals.

The minerals have had a long time to build up in the lake. Qarhan may be the remnant of an ancient salt lake that existed two million years ago. Over time, the water has dissolved minerals from the rocks and then redeposited them in crystal form after evaporation again and again. The result is a high concentration of minerals in the lakes and evaporation ponds, as well and a rim of white mineral ore around the banks. Cold and arid, the playa now gets about 28 to 44 millimeters (1-2 inches) of precipitation per year, but loses about 3,000 mm (118 inches) to evaporation, so the dissolution-evaporation process continues.

The minerals are valuable for a number of industries. Sodium chloride is table salt. Potassium (potash) is a key ingredient in fertilizer and is used in a number of other industrial processes. China’s largest potassium production industry, including the Qinghai potash fertilizer plant, is centered around Lake Qarhan.