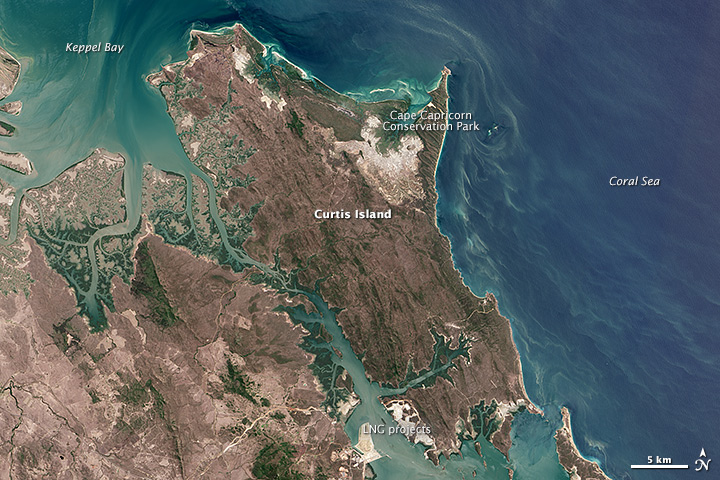 Curtis Island lies just off Australia’s central Queensland coast, straddling the Tropic of Capricorn. In this image acquired on November 3, 2013, by the Operational Land Imager (OLI) on the Landsat 8 satellite, the whole of Curtis Island can be seen situated between Keppel Bay and the Coral Sea.

The island has miles of uninhabited beaches, sand dunes, wind-sculpted shrublands, forests, mangroves, salt marshes, mud flats, and large salt flats. The varied landscapes, wetlands, and waters support large fisheries, the endangered green and loggerhead turtles, the flatback turtle, dolphins, and the yellow chat—a bird once thought to be extinct. The eastern half of the island is largely protected as part of Curtis Island National Park and Conservation Park and the island can only be accessed by sea or air, making it somewhat remote.

On the northeast side of the island, the rocky headland of Cape Capricorn juts out into the Coral Sea. On May 25, 1770, Captain James Cook named the cape, writing in his journal: “I found this point to lay directly under the Tropic of Capricorn, and for that reason call it by that name.”

To the island’s southwest, a natural deepwater harbor named Port Curtis supports major industrial port cities on the mainland, where they process coal, aluminum, and liquefied natural gas (LNG) for export. That industrialization has spread to Curtis Island, where the footprint of three large LNG processing facilities is visible. Billions of dollars have been invested to tap Queenland’s natural gas supply, including the recent approval of a gas transmission pipeline to Curtis Island.

The Australian government is attempting to balance economic development with environmental stewardship. In August 2013, 2900 hectares (7200 acres) on southern Curtis Island were given protected status using environmental offset funds from the LNG companies on the island.