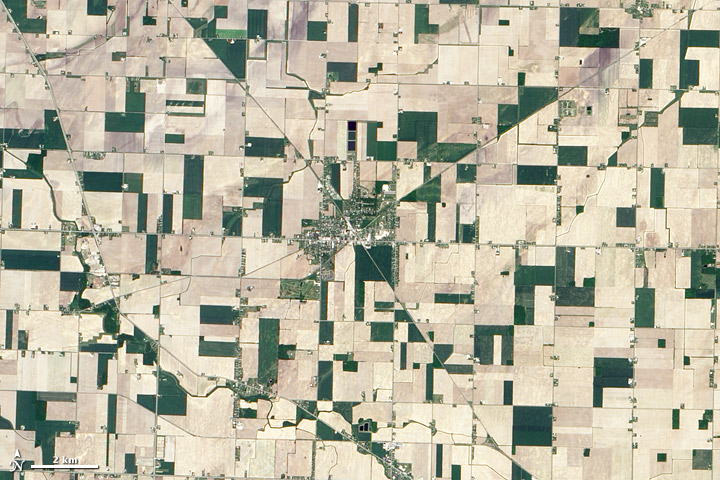 The small town of Reese, Michigan, is a cluster of white and green around the crossroads of two railroads and a highway in this true-color image. Acquired by the Advanced Land Imager (ALI) on NASA’s Earth Observing-1 (EO-1) satellite, the image shows the town on May 21, 2012.

The patterns on display can be traced back to an act of the Continental Congress. The new nation was expanding and trying to decide how to manage and govern newly settled lands west of the Appalachian Mountains. In the Ordinance of 1785, the young government divided the land into townships of six square miles; townships were subdivided into individual plots measuring one square mile (640 acres) apiece. The act divided western lands into squares and laid the foundation for the Homestead Act of 1865, in which public lands were transferred to private citizens who lived on the land.

The remnants of those square property boundaries are evident in the regular shape of the fields surrounding Reese. Since homesteaders had to live on their property, small supply centers sprung up around crossroads. Later, towns developed along railroads, since trains needed to be resupplied with water every eight to ten miles. These supply stops provided way points and hubs for mail delivery and for the storage of farm products (grain, livestock) for shipping to larger markets, stores, schools, and churches.

Reese seems to have been settled for all of these reasons. The town was established in 1873 along a new road connecting Saginaw in the west and Watrousville in the east. The road is the straight line along the lower edge of the town. The railroad also came to the area in 1873, and G.W. Reese was the railroad superintendent. The town became known as Reese and expanded around the railroad, now sitting in the center of the ”X“ formed by the railroad lines.