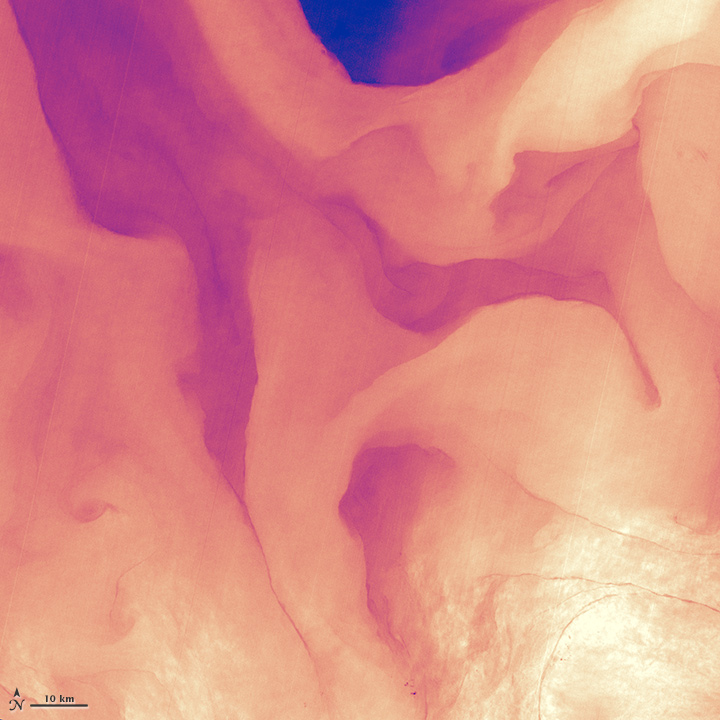 A Lava Lamp Look at the Atlantic

Stretching from tropical Florida to the doorstep of Europe, this river of water carries a lot of heat, salt, and history. The Gulf Stream is an important part of the global ocean conveyor belt that moves water and heat across the North Atlantic from the equator toward the poles. It is one of the strongest currents on Earth, and one of the most studied. It’s discovery is often attributed to Benjamin Franklin, though sailors likely knew about the current long before they had a name for it.

This image shows a small portion of the Gulf Stream as it appears in infrared imagery. Data for this image was acquired on April 9, 2013, by the Thermal Infrared Sensor (TIRS) on the Landsat 8 satellite. TIRS observes in wavelengths of 10.9 micrometers and 12.0 micrometers. The image above is centered at 33.06° North latitude, 73.86° West longitude, about 500 kilometers (300 miles) east of Charleston, South Carolina. (The downloadable KML and GeoTIFF files will allow you to see it on a map.)

“For several locations around the world, however, there are floating buoys that can directly measure the sea temperature,” he added. “We can compare these buoy measurements with the TIRS image-derived temperatures and adjust our calibration to provide a more accurate temperature calculation for TIRS and other satellites.”

For a phenomenon such as the Gulf Stream, the sensitivity and relatively high resolution of the TIRS instrument allows scientists to tease out the micro structures within the much wider patterns. In the image above, water temperatures range from 18° to 21.25° Celsius (64° to 70.25° Fahrenheit), with cooler temperatures in purple and the warmest nearly white. Note how the Gulf Stream is not a uniform band, but instead has finer streams and pockets of warmer and colder water. The bright area in the lower right is likely caused by sunglint, the reflection of sunlight directly back at the sensor from the ocean’s surface.