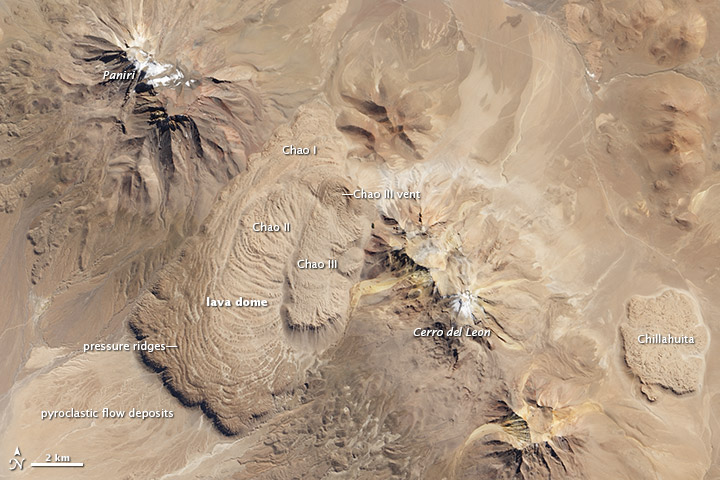 The Shapes that Lavas Take, Part 1

Streams of molten rock that ooze from gaps or vents in the Earth’s surface are called lava flows. Though generally slow-moving, these rivers of rock pose a hazard to everything in their paths. They can bury or burn homes and roads, ruin farmland for generations, and transform glaciers into muddy landslides (lahars).

Lava flows can take many shapes and move at very different rates depending on the viscosity of the magma, the slope of the land, and the rate of an eruption. Some of the speediest flows travel 60 kilometers (40 miles) per hour; the slowest creep along at less than 1 kilometer (0.6 miles) per hour. They can sometimes even flow for more than a year after an eruption has ended.

Viscous (or sticky), non-explosive flows produce distinctive landforms known as lava domes. These circular mounds form as lava slowly oozes from a vent and piles up on itself over time. Lava domes tend to have steep, cliff-like fronts at their leading edge and wrinkle-like pressure ridges on their surfaces.

The Chao dacite is a type of lava dome known as a coulée. These elongated flow structures form when highly-viscous lavas flow onto steep surfaces. On May 14, 2013, the Operational Land Imager (OLI) on NASA’s Landsat 8 satellite acquired the image above, which highlights some of the distinctive features of a coulÃ©e.

The Chao dacite sits between two volcanoes in northern Chile: the older and partially-eroded Cerro del Leon and the younger Paniri. The dome itself is a giant tongue of rock that extends southwest from the vent. Curved pressure ridges known as ogives dominate the surface of the 14 kilometer (9 mile) dome.

Volcanologists think the Chao dacite dome formed over a period of about 100 to 150 years. A pyroclastic flow during the Chao I phase left light-brown deposits of tephra and pumice at the leading edge of the flow. Pyroclastic flows are avalanche-like events that bring mixtures of hot gas and semi-sold rocks surging down the flanks of volcanoes at speeds as fast as 100 kilometers (60 miles) per hour.

This period was followed by the Chao II phase, when 22.5 cubic kilometers (5.4 cubic miles) of lava erupted. This flow has 400-meter tall (1,312 feet) fronts that stand out with their dark shadows on the southwest end. The final, Chao III phase added another 3.5 cubic kilometers (0.8 cubic miles) of denser lava with a lower viscosity. This type of lava is less likely to form pressure ridges, so surfaces in this part of the flow are comparatively smooth.

It’s not clear why the Chao dacite erupted as a flow and formed a dome rather than erupting explosively. However, some researchers have noted that there are a number of other domes in the area (such as Chillahuita), suggesting that the domes may be the leading edge of a broader magmatic system that erupted along pre-existing faults. Though much larger, a series of lava domes along the eastern side of California’s Sierra Nevada range—the Mono-Inyo chain—offers a possible analog for what might be happening in this part of Chile.

Read part 2 of this story to learn about landforms produced by less viscous lava.