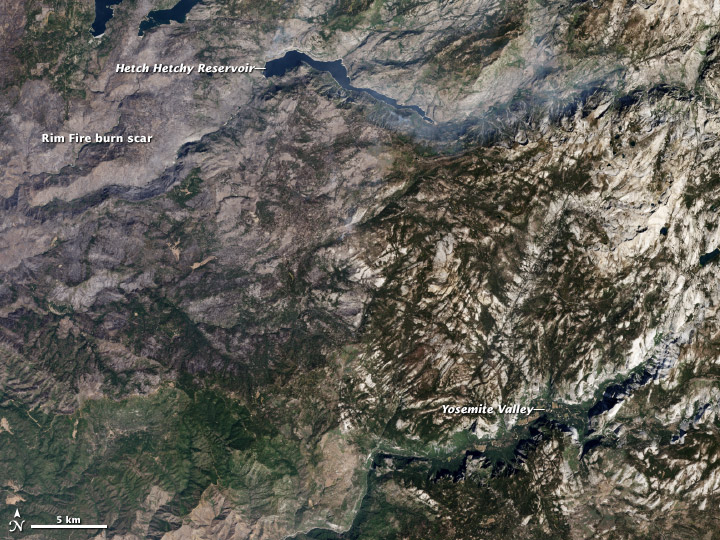 From above, Yosemite National Park’s majestic granite peaks and deep valleys are a jumble of light and dark. In fact, this section of the Sierra Nevada is known as the range of light because of the white color of the peaks, and the name holds true from space. Dark green forests and shadows fill in the lower elevations, providing contrast.

At first glance, it might appear that the range takes a turn to the northwest in this image, which was acquired by the Operational Land Imager (OLI) on the Landsat 8 satellite on September 16, 2013. The landscape in the upper left quadrant is gray and brown, though its color comes from ash and charcoal rather than granite. This is land that was burned in the Rim Fire. The boundary between burned and unburned land is difficult to see in the true-color view (though it would be very stark in a false-color infrared). External maps of the burn area make it easier to see where the fire burned. (For more tips on interpreting true-color satellite images, see How to interpret a satellite image: Five tips and strategies.)

The Rim Fire started on August 17, 2013, in the Stanislaus National Forest, west of Yosemite National Park. The fire burned more than 255,000 acres, 77,254 of which were in the park. By September, the smoke had cleared, the embers cooled, and firefighters and their equipment were all gone. And yet the image represents the beginning, not the end of the disaster for managers of Yosemite and Stanislaus.

Though the fire was extinguished, conditions were initially too dangerous in many places for managers to assess the damage and plan a recovery. Satellite images like this one provide some indication of the severity of the burn. Badly burned land is prone to erosion and flooding (particularly on steep slopes or near rivers or streams), affecting water quality and safety. Burned trees near roads and trails also pose a safety hazard.

For the Rim Fire, the Burn Area Emergency Response team determined that the biggest hazards were related to erosion, flooding, and trees. They also worried about the potential for invasive species and damage to cultural sites. To recover from the fire, they recommended that the park service clean culverts to increase their capacity to hold extra runoff. With plants and trees gone, water more easily runs off into waterways, carrying loose, unanchored soil. They recommended that sandbags be placed around buildings near the Hetch Hetchy Dam and the entrance station; that trails and roads be cleared of fallen trees and hazardous trees be removed; that warning signs be placed in burned areas; and that cultural sites be stabilized from erosion or flood damage. Finally, the response team warned of the potential for invasive species to take hold in the recovering ecosystem, as firefighters from across the country were digging up the ground and potentially dropping foreign seeds.