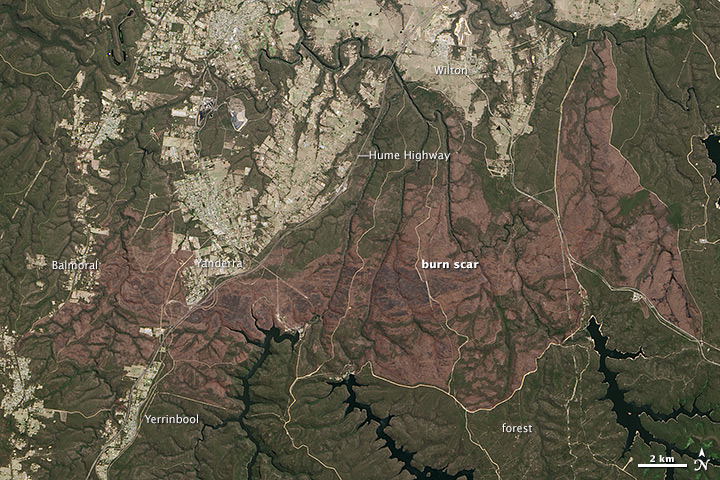 The combination of a wet spring that bulked up grasslands and a hot summer that left forests in the Blue Mountains parched set the stage for a wave of aggressive wildfires in October 2013. One of the larger fires in New South Wales raged outside of Sydney, near the communities of Balmoral, Yanderra, Wilton, and Yerrinbool.

On November, 5, 2013, the Operational Land Imager (OLI) on Landsat 8 captured this natural-color view of the burn scar left by the fire. Areas with charred vegetation are brown. Forested areas that were not affected by the fire are green. The combination of buildings, roads, and fields appears white to pale brown.

The fire started on October 17 near Balmoral, then spread south and east toward Yanderra and Yerrinbool. After jumping Hume Highway, it moved farther east into the hills surrounding Lake Neapean, Lake Avon, and Lake Cordeaux. The blaze forced thousands of people to evacuate their homes. While firefighters prevented it from causing serious damage to property, a nearby blaze around the same time destroyed nearly 200 homes.