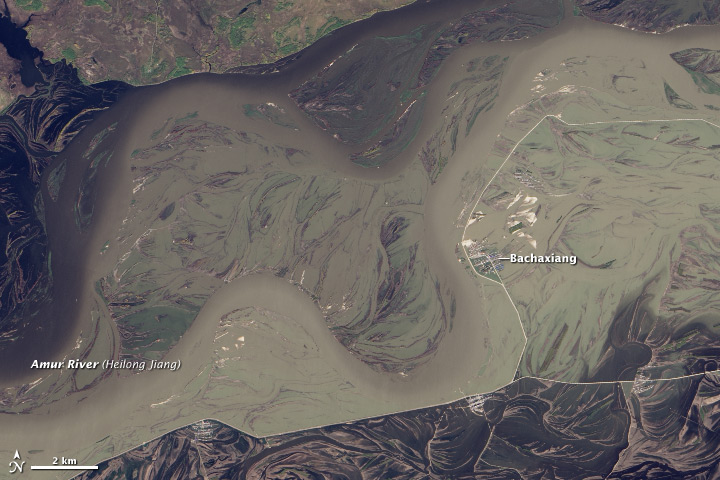 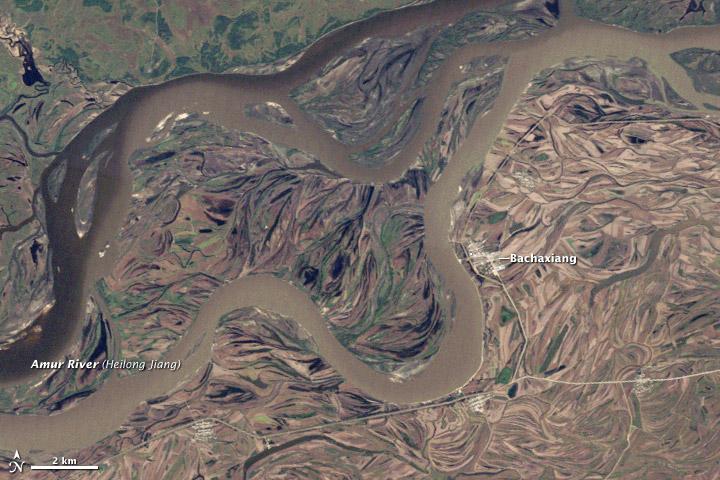 Flooding along the Heilong River

The Amur River (Heilong Jiang in Chinese) flows unfettered from Mongolia to China to Russia (forming the Chinese-Russian border), and through Russia’s Far East into the Sea of Okhotsk—a journey of 4,444 kilometers (2,761 miles). It is the tenth longest river in the world, and the third longest without a dam. Confined by mountains for most of its course, the river winds across a vast alluvial flood plain in its midsection, where it grows and shrinks dramatically throughout the year.

Water levels vary so much that the river’s minimum recorded flow is just one percent of its maximum recorded flow. Monsoon rains cause multiple floods each year, usually in July and August, when the river can expand to 10 to 25 kilometers in width. Some years bring more extreme floods than others, and 2013 proved to be the most extreme yet. Unusually heavy rains raised parts of the river to their highest levels on record, forcing evacuations and claiming lives in both China and Russia.

The Operational Land Imager on the Landsat 8 satellite acquired the top image on September 27, 2013. The river has swallowed up the Chinese town of Bachaxiang, having overcome the straight white levee that stands between the town and the river’s usual channels.

The lower image, from the Landsat 5 satellite, shows the Amur/Heilong River on September 19, 2010. The flood plain is covered by intertwined channels cut during previous floods. Because of the nature of the flood plain, water can linger for a long time. In this image, some of the old channels still hold water, which appears nearly black in this scene.

Though occasionally destructive, the annual floods support the biological diversity of the floodplain ecosystem. This region is part of the Sanjiang Plain, where there are many significant and highly diverse wetlands supporting 23 threatened species among many others. The floods also deposit sediment on the plain, making the soil rich for agriculture. The good soil and the climate make the Sanjiang a prime grain-growing region, and several fields are visible beyond the river in the large, downloadable images.