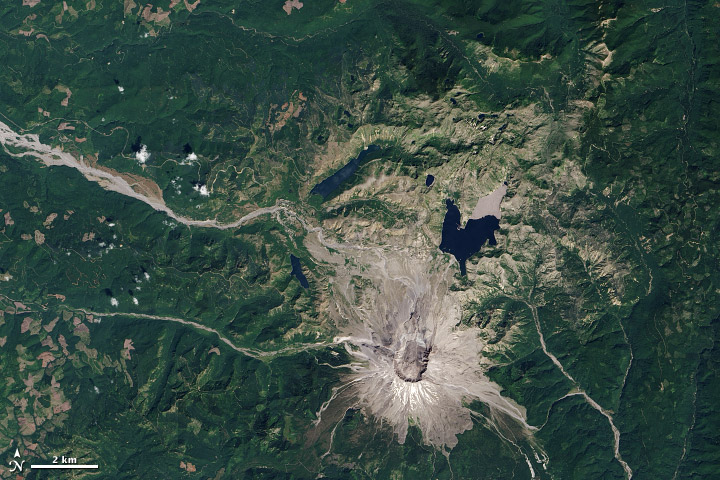 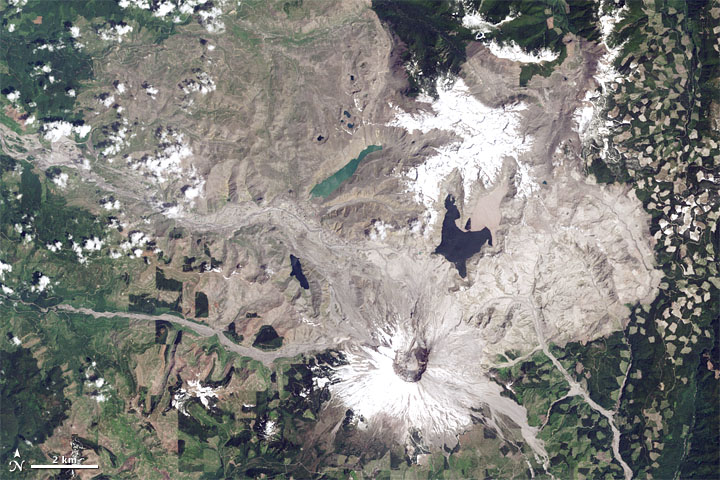 On May 18, 1980, a volcanic eruption obliterated the landscape around Mount St. Helens. Entire forests were mowed down by the blast wave. The land surface was sterilized by heat and noxious gas, and then buried under tens of meters of ash, mud, and rock. Nearly every living creature perished within a few miles of the collapsed mountain.

But some traces of life survived beneath the debris. Seeds, spores, gophers, fungi. Other flora and fauna survived just beyond the edge of the blighted landscape. And then, as so many scientists and science-fiction authors have said: life found a way. In just a few years, natural colonists reclaimed some of the land. In three decades, they have paved over the destruction with robust green.

The top image shows the area around Mount St. Helens on August 20, 2013, as captured by the Operational Land Imager (OLI) on the Landsat 8 satellite. The second image shows the same area on June 17, 1984, as viewed by the Thematic Mapper on Landsat 5. (Images from prior years are only available in false-color.)

The eruption of Mount St. Helens in Washington blew down or burned up 600 square kilometers (230 square miles) of forest, laying waste to parcels as far as 27 kilometers (17 miles) from the summit. About 4.7 billion board-feet of timber were lost; the U.S. Forest Service eventually salvaged about 200 million board-feet, while millions more still float and drift across Spirit Lake to this day.

With water, sunlight, and time, vegetation came back to the Mount St. Helens National Volcanic Monument. Mosses, grasses, shrubs, and then trees. The Forest Service has helped over the years, planting nearly 10 million trees on 14,000 acres. In fact, the forests have come back so well that some have already been commercially thinned. The elk, the fish, and the tourists have come back, too.

Mount St. Helens brought destruction, but also a gift for ecologists and earth scientists. Located on federal and state lands, and close to scientific centers in Washington, the area became a natural observatory for studying how plants, animals, and other forms of life could literally rise from the ashes and re-colonize a patch of land. Read more in our feature World of Change: Devastation and Recovery at Mt. St. Helens.