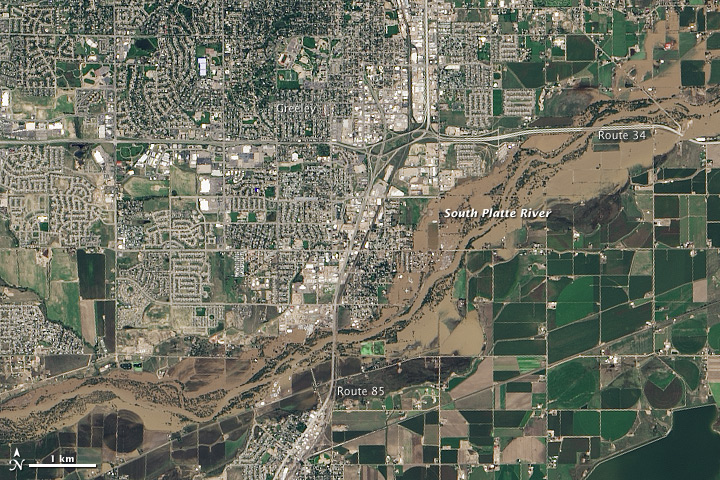 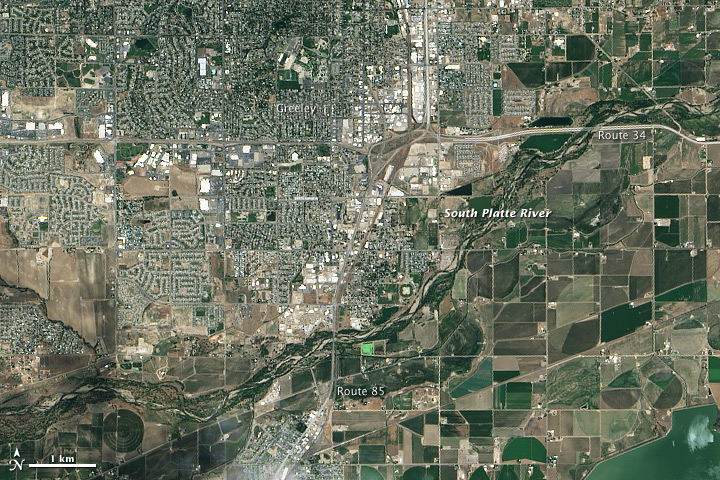 Though water levels on the South Platte River were receding, muddy brown waters were still out of the river’s banks near Greeley, Colorado, on September 17, 2013, when the Operational Land Imager (OLI) on the Landsat 8 satellite acquired this image. At the time, the river was more than six feet above flood stage, down from more than eight feet above flood stage.

The image shows that the flood has washed away roads, including sections of U.S. Highway 34. Farmland and a few developed areas are under water. Heavy rain caused flooding across the Front Range of the Rocky Mountains starting on September 11, and much of that water made its way into the South Platte River. The river reached a record 18.79 feet in the early morning hours of September 14. The previous record crest was 11.73 feet. Flood stage is 10 feet. As the water subsides in Colorado, it is expected to swell the river downstream in Nebraska.

As of September 18, floods had affected 17 counties in Colorado, leaving six people dead, 306 missing, and more than 18,000 evacuated, according to the Colorado Office of Emergency Management. Early estimates place the cost of the floods at two billion dollars.

Though destructive and costly, all of the excess water may help parts of Colorado recover from drought. The rain helped refill some depleted reservoirs and recharge dry soil. However, it also damaged irrigation infrastructure, so the impact on farmers is mixed.