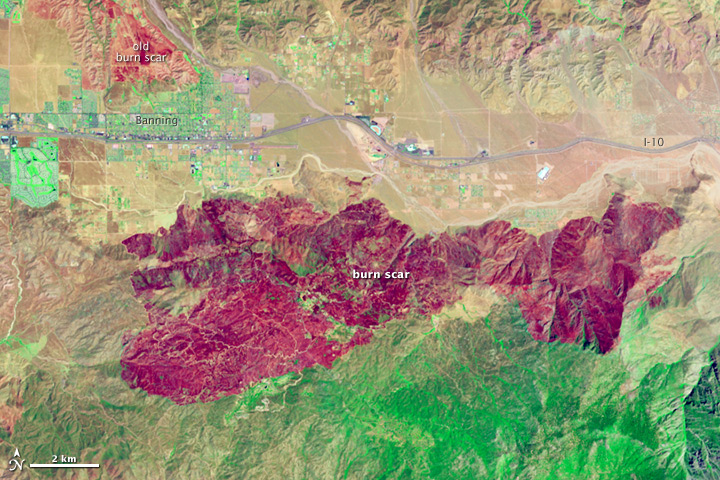 On August 10, 2013, the Operational Land Imager (OLI) on Landsat 8 captured this false-color image of the burn scar left by the Silver fire, which burned in southern California, just south of Banning.

The image was made with a combination of shortwave infrared, near infrared, and green light collected by OLI. Shortwave infrared is between near infrared (seen in infrared photography) and thermal infrared light (used by temperature sensors) on the electromagnetic spectrum. Shortwave infrared light is reflected by some surfaces (like bare soil), and emitted by very hot objects (lava or fires). Burned areas appear dark red. The lighter red area in the upper left of the image is a burn scar from a previous fire. Dark green areas are forests; light green areas are grasslands, golf courses, or yards.

The fire started on August 12, 2013. By the time firefighters had contained the blaze, it had burned about 20,000 acres (8,000 hectares), forced thousands to evacuate their homes, injured eight people, and destroyed 46 structures. As of August 22, wildfires had burned 3.4 million acres in the United States, making 2013 somewhat less active than other recent years. Over the last decades, fires had charred an average 5.7 million acres by August 22, according to statistics published the National Interagency Fire Center.