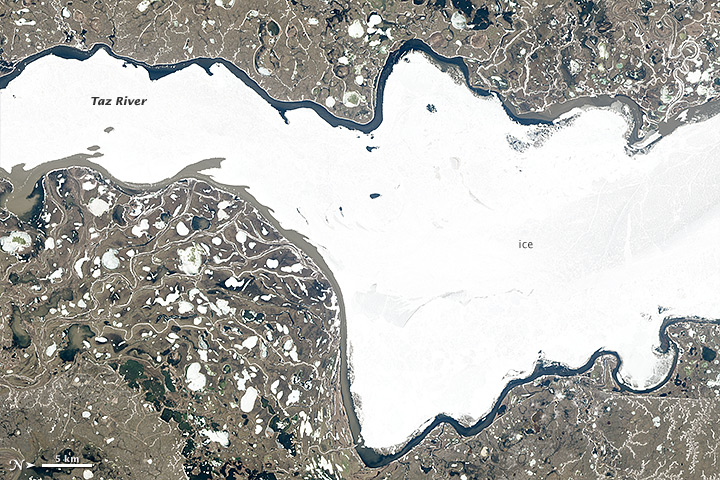 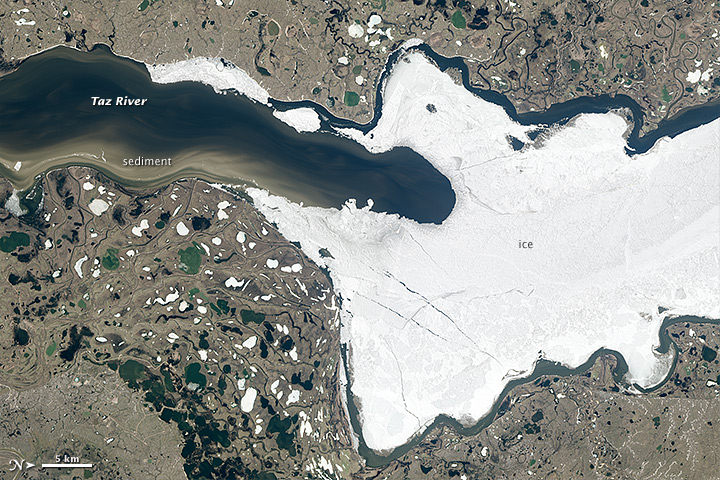 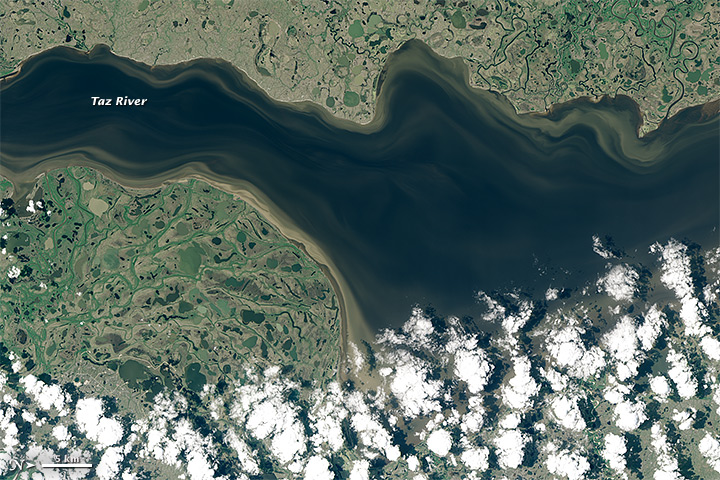 Change is often elusive to see, visible only in the contrast between before and after. But on June 18, 2013, the Operational Land Imager on the Landsat 8 satellite captured Russia’s Taz River in transition (middle image). Ice was breaking up on the river, while sediment-laden spring floods piled up behind the unmoving mass. The wetlands and tributaries surrounding the river were similarly suspended in a half-frozen, half-thawed state. The area had been frozen a little more than a week earlier (June 9), when Landsat 8 acquired the top image, and was entirely ice free just over two weeks later (July 4), when the lower image was acquired.

The Taz River is one of many that drain into the Arctic Ocean and its surrounding seas. But as Arctic rivers go, the Taz is relatively minor. About 33 cubic kilometers of water flow from the river into the Kara Sea every year. The Taz’s strongest flow usually occurs in June. By contrast, the largest contributor to the Arctic Ocean, the neighboring Yenisey River, discharges 580 cubic kilometers annually.

The spring thaw sends an annual gush of fresh water into the Arctic Ocean, which is the most dominated by fresh water of all the world’s oceans. This fresh outflow plays a role in sustaining Arctic sea ice. Because it is less dense than salty water, the fresh water sits near the surface and forms a layer that insulates sea ice from deeper, warmer seawater. Contact with the warmer water would cause the sea ice to melt at a faster rate.

Too much fresh water, however, has the potential to interfere with ocean currents; some researchers suspect it could slow the global ocean conveyor belt. For these reasons, scientists are keen to track the output of Arctic rivers. In recent years, scientists noted that Arctic waters near Canada have been growing fresher. A 2012 Nature paper tracked the source of the fresh water to Russia’s great Arctic rivers. Weather patterns had moved the water from the Asian side of the Arctic to the North American side, though overall Arctic Ocean salinity remained unchanged.

NASA Earth Observatory images by Jesse Allen and Robert Simmon, using Landsat data from the U.S. Geological Survey. Caption by Holli Riebeek. Congratulations to Sean for being the first person to solve the puzzle. GeologyDave gets credit for providing exact coordinates a few minutes later.