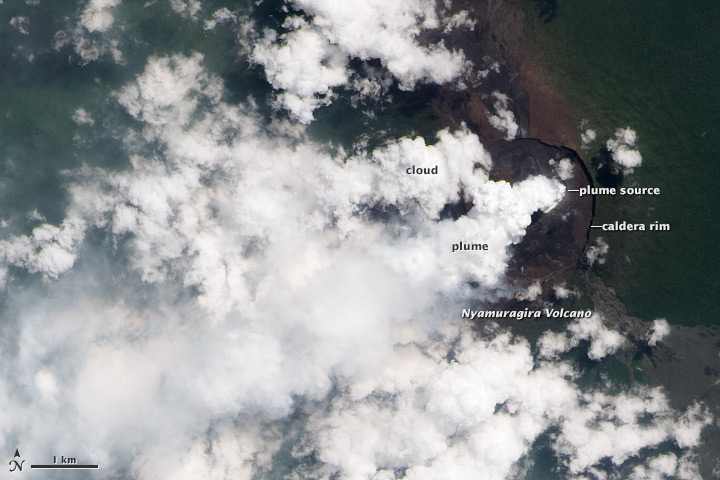 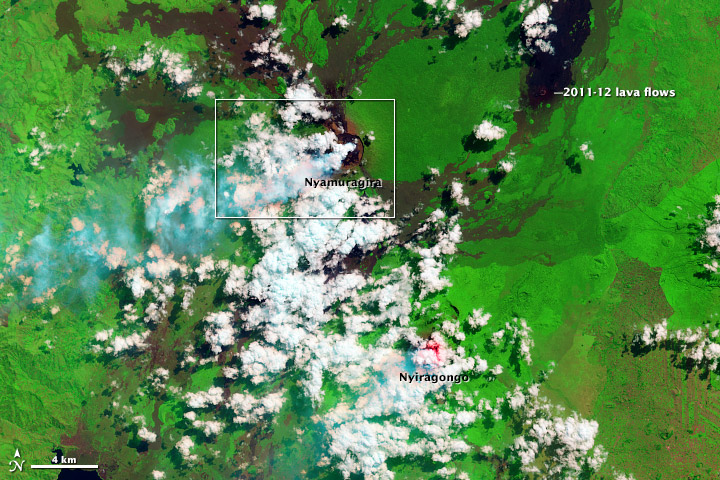 Journey from the Center of the Earth

A thick plume rose from the summit of Nyamuragira volcano in June 2013. Located near the eastern boundary of the Democratic Republic of the Congo, Nyamuragira is one of Africa’s most active volcanoes. Its plume is rich in water vapor—which condenses rapidly in the humid tropical air—and sulfur dioxide, which lends a blue tint in natural-color satellite imagery (top). Carbon dioxide, fluorine, and chlorine gas are also found in Nyamuragira lavas and likely present in the gas plume.

The source of the plume appears to be a pit nestled within the caldera that tops Nyamuragira. If outgassing magma was near the surface, then the intense heat would cause a bright red glow in shortwave infrared light (included in the lower, false-color image). No such glow is visible atop Nyamuragira, but it is present on neighboring Nyiragongo Volcano, which has featured a lava lake for more than a decade.

These images were collected on June 11, 2013, by the Operational Land Imager on Landsat 8. In natural color (top), the rainforest is dark green, clouds are white, and the sulfur-rich volcanic plume is very light blue. Barren land at Nyamuragira’s summit and lava flows are brown or black. In false-color, clouds are mostly white and volcanic plumes are cyan. Forest and other vegetation is bright green. Fresh lava flows from the 2011–12 eruption of Nyamuragira are black, and older lava flows appear as brown tendrils running down the mountain’s flanks. Agricultural fields in the southeast (lower right) corner of the image also appear brown.