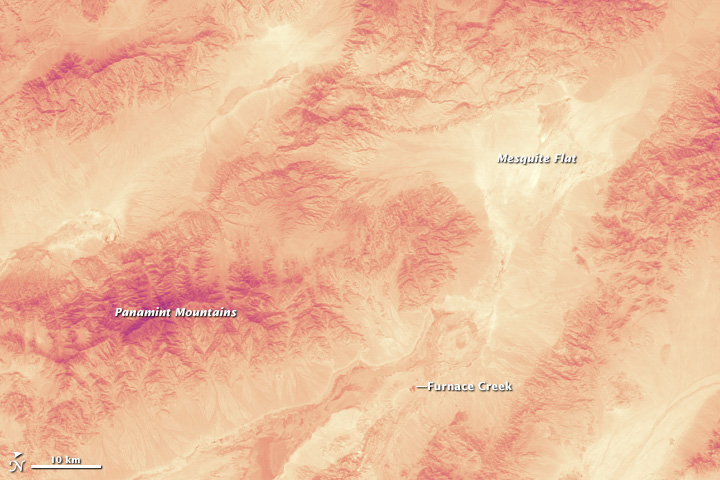 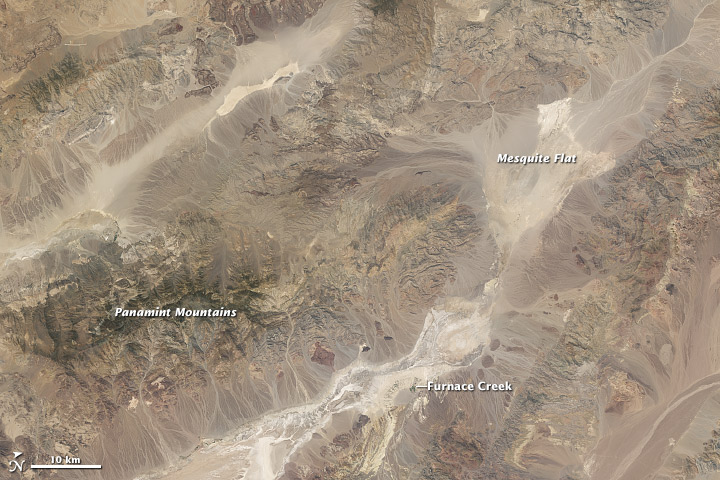 The heat wave that gripped the western United States this week may have set an all-time record in Death Valley National Park, California. The air temperature rose to 129.2 °Fahrenheit (54 °Celsius) at the Furnace Creek Visitor's Center on June 30, 2013, possibly breaking the all-time record high June temperature for the United States (set in Volcano, California, on June 23, 1902). A sharp bend in the jet stream trapped a strong ridge of high pressure over the western U.S., leading to an extreme heat wave and record temperatures.

The top image above shows the heat emanating from Death Valley on June 30, 2013. The measurement is surface temperature—how hot the land feels to the touch—as measured by the Thermal Infrared Sensor on the Landsat 8 satellite. The accompanying natural color view from the Operational Land Imager on Landsat 8 shows that the cooler areas are either higher in elevation or covered with plants. In fact, plants cooled Furnace Creek, the site of the record-high air temperature observation. Mesquite Flat and other nearby valleys radiated more heat.

The image also illustrates why Death Valley is one of the hottest places on Earth. The valley is low in elevation and sits between two high mountain ranges. As the image shows, few plants grow in the valley, so the rocks and soil absorb the summer heat. That heat radiates back to the atmosphere at night, but doesn't get past the steep mountains. Instead, the air cools only slightly before sinking back to the valley. As it sinks, the change in pressure heats the air even more, generating hot winds. This means that the late-June heat wave had an even greater impact on Death Valley than surrounding regions.