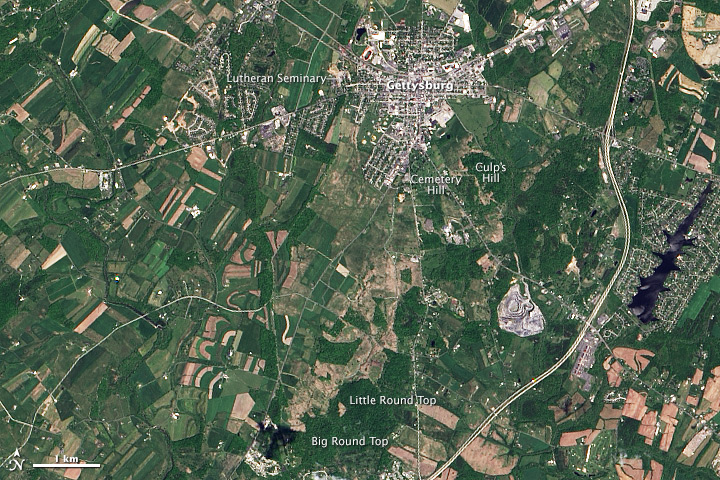 150th Anniversary of the Battle of Gettysburg

One hundred fifty years ago this week, two great armies met in the most famous and costly (in human terms) battle of the American Civil War. More than 160,000 soldiers from the Union and Confederate states faced off from July 1–3, 1863, near a small town in southern Pennsylvania; by the end, more than 51,000 were killed, injured, missing, or captured. Historians are still parsing and debating the strategies, motivations, and fine details of the event. One team is applying modern satellite-based technology—geographic information systems, or GIS—to shed new light and shadow over the battlefield.

Anne Kelly Knowles and Dan Miller of Middlebury College and Allen Carroll of Esri, Inc., led a team that spent several years analyzing new and old maps, photographs, and other accounts of the landscape around Gettysburg. The goal was to recreate what Union and Confederate leaders saw—and what they could not see—in the days of the battle.

Two key elements in their effort were the National Elevation Dataset and an 1874 map of the battlefield. The elevation dataset, a project of the U.S. Geological Survey, combines ground-based data with spaceborne and airborne surveying missions (including data from NASA’s Shuttle Radar Topography Mission) into a comprehensive map of land-surface topography in the United States today. The team then compared the current map with an historic, 12-foot-by-13 foot map printed in 1874 by the Army Corps of Engineers. The old map helped the team remove features from the landscape that were not there in 1863. It also helped them distinguish the orchards, farms, hardwood forests, pine forests, wooden fences, stone walls, and buildings that were there at the time of the battle.

The image above does not replicate Knowles’ panoramas and viewscapes; you have to visit the web site of the Smithsonian Institution to explore their recreations. Instead, this image shows the landscape around Gettysburg, Pennsylvania, as observed on May 14, 2013, by the Operational Land Imager (OLI) on the Landsat 8 satellite. The town had a population of 7,620 at the 2010 census, and the many surrounding farms were still bare or newly planted at the time of the image. You can click here for a close-up of the modern national military park on the site.

“The technological limits of surveillance during the American Civil War dictated that commanders often decided where to deploy their troops based largely on what they could see,” Knowles wrote. “The Confederates’ field positions, generally on lower ground than Yankee positions, put Lee at a disadvantage. Our mapping reveals that Lee never had a clear view of enemy forces; the terrain itself hid portions of the Union Army throughout the battle. In addition, Lee did not grasp—or acknowledge—just how advantageous the Union’s position was.”

For instance, when Confederate General Robert E. Lee looked out from a cupola at the Lutheran Theological Seminary on July 2, he could not see Union troops to the south near the hills known as Little Round Top and Big Round Top. He sent General William Longstreet to try to get around the southern flank of the Union Army, a move that failed. Similar problems of field vision also set up the infamous “Pickett’s charge” that ended badly on July 3.

On the other hand, Union soldiers situated on the higher ridges to the east—the Round Tops, Cemetery Hill, and Culp's Hill—had a much better vantage point for viewing Confederate positions and movements. These positions on the high ground, as well as the shielded movements behind those hills, allowed the Union Army to occupy better defensive positions and reinforce lines in the right places. This advantage helped win the battle and, in the long run, the war.