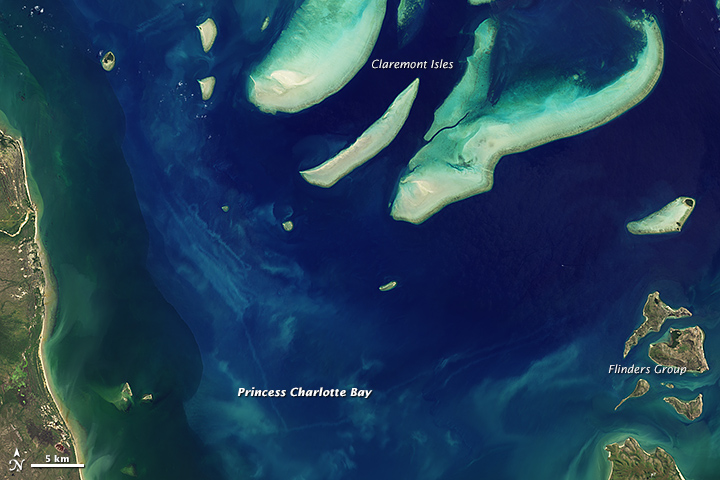 A Better Eye on Reefs

The concept behind Landsat is to gather images of Earth’s land surfaces. But in four decades of service to science, the satellites have proven to themselves quite useful for observing some blue parts of the planet, too.

The study of coral reefs has been particularly enriched by Landsat. Scientists used earlier generations of Landsats to create a global image library of coral reefs. They have also been able to do time-series assessments of the health of some reefs. For instance, researchers used 18 years of Landsat data to show a decline in the health of reef habitat across roughly 68 percent of the Florida Keys National Marine Sanctuary. Satellite images also can detect signs of trawling and other fishing activities that can be harmful to reefs.

“The remote location and massive size of reefs make them an ideal subject for Landsat remote sensing,” said Phillip Dustan, a marine biologist at the College of Charleston (South Carolina) who has worked with Landsat to map reefs around the world. “Reef management benefits from satellite imagery through mapping, change analysis, and threat assessment, While a single image can be used to provide mapping data, the long-term data set provided by Landsat makes for powerful time series of images that can probe the dynamics of ecological change.”

This image of Princess Charlotte Bay in Australia was acquired by the Operational Land Imager (OLI) on Landsat 8 on April 20, 2013, while the satellite was still being calibrated and checked out. The area lies along the east coast of Queensland’s Cape York Peninsula. The scene shows Claremont Isles National Park, where coastal waters are protected as part of Great Barrier Reef World Heritage Site. The islands are important habitat and breeding grounds for seabirds, and they are off-limits to humans.

“Coral reefs continue to change rapidly in response to stresses applied at scales from local to global,” Dustan added. “The very adaptations that make corals so successful in nutrient-poor, clear tropical waters also leave them vulnerable to climate- and ocean chemistry change.”

Near the coast, weather patterns, natural aerosols, air pollutants, waves and currents, and floating material can distort, reflect, and refract light signals. The coastal blue band can be compared with other wavelengths to remove this environmental “noise” and better tease out fine structures. The blue band is also similar to wavelengths observed by previous NASA satellite sensors, so Landsat 8 allows researchers to extend scientific records that go back decades.